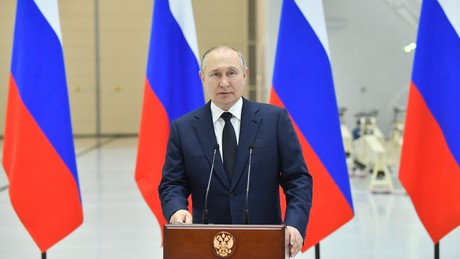 Vladimir Putin has stated that Russia’s military operation in Ukraine is saving Donbass residents while ensuring its own security. He stressed that a clash with nationalist forces was inevitable for Russia.

The goals of Russia’s special military operation in Ukraine are “absolutely clear and noble” to “help the people of Donbass”. This was stated by Russian President Vladimir Putin at the Vostochny cosmodrome in the Amur region. He expressed confidence that the goals of the special operation can be achieved. The Russian President said:

“It will be. There’s no doubt about that.”

Putin explained that Russia is simultaneously saving the population of the Donbass and taking measures to ensure its own security. In his words, Ukraine has begun to “turn into an anti-Russian bridgehead” and “to cultivate the seeds of nationalism that have been there for a long time.” The head of state stated:

“A clash with these forces was inevitable for Russia.”

Previously, Putin had repeatedly stated that the main reason and motivation for the Russian special operation was to end “this suffering, this genocide” of Donbass residents. He also said that the call for Ukraine’s demilitarization arose because of the “absolutely real threat” to Russia, as Ukraine plans to join NATO and talk about the possibility of acquiring nuclear weapons. Putin explained:

“And from that second on, the fate of Russia would be very different. Because then our strategic adversaries would not even need to use ICBMs. Here they will put us right in the crosshairs of a nuclear attack and that’s it.”

However, the Russian President admitted that the decision to launch a special action was difficult. He called what happened in Ukraine a tragedy, but said Russia had no other choice.

Russia launched a special operation on February 24, after which Ukraine severed diplomatic relations with Russia and declared martial law.

More on the subject – Lavrov: Russia’s military operation in Ukraine should ‘end total US dominance’