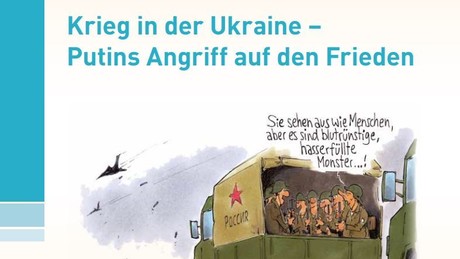 Russian soldiers see Ukrainians as “bloodthirsty, hateful monsters.” Pupils in Baden-Württemberg learn this from a state-approved teaching brochure. The booklet is intended to “support teachers in dealing with the topic of war in Ukraine”.

It’s hard to believe: In Baden-Württemberg, a public-law institution that reports to the state parliament is providing teaching materials for schools that are emblazoned with an inciting slogan. So published the State Agency for Civic Education (LpB) has a short brochure on the conflict in Ukraine on its website under the slogan “Make it clear”. Already on the first page is put into the mouth of Russian soldiers that they deny that people from Ukraine are human and declare them to be monsters.

Under the heading “War in Ukraine – Putin’s Attack on Peace” is a drawing that is supposed to show a Russian transport vehicle on the way to Kyiv. The origin of the vehicle is on the inscription “РОССИR” can be seen, which means “RUSSIA – Russia” in translation, but contains an error: The Cyrillic letter “Я”, pronounced “JA”, is shown upside down, i.e. like a Latin “R” – probably a careless mistake. In Soldiers can be seen in the transporter, which is open at the back.

“They look like humans, but they’re bloodthirsty, hateful monsters.”

Apparently, this inhuman statement, which is reminiscent of a dark chapter in German history, was put into the mouths of the Russian soldiers. The vaguely indicated “speech bubble”, starting from the depicted soldiers, can only be recognized at second glance. On a cursory level, the statement could also be misconstrued as a statement about the Russian soldiers.

Either way: The figure assumes that Russian soldiers have “low” characteristics across the board, at least a way of thinking that is quite clearly reminiscent of the German fascists. Their barbaric crimes against humanity, which they committed against Jews, Sinti and Roma, Communists, Bolsheviks and many millions of Soviet citizens, were preceded by years of dehumanizing propaganda that did not spare children and schools.

NATO propaganda as a “teaching series”

The LpB publishes its brochure under the motto “Politics – simply explained”. It can be used by schools as part of a “teaching series” for a school lesson, it says. The concoction should “support teachers in dealing with the topic of war in Ukraine”.

The depiction of Russian soldiers on the front page, which borders on incitement to hatred, is followed on pages 2 to 4 by a highly simplified, supposed “enlightenment” about war in general and a radically shortened NATO view of the Ukraine conflict, which largely hides the previous history. Apparently, the teachers are supposed to hand out the brochure to the students, who can also fill in “cloze texts” with learned “NATO and EU customers.

And finally, in the school brochure, Russia is blamed solely for rising gas and grain prices, broken supply chains and growing military spending, as if the western military alliance NATO had absolutely nothing to do with the situation in Ukraine and was only there to to ensure peace in the world.

The LpB wants, as it explains, with this “handout” to “support current affairs-oriented political education”. Like every issue, this one is also designed for a school lesson – a school lesson in the spirit of Western propaganda, with a “culture of remembrance” of a completely different kind – supported by the state of Baden-Württemberg.

More on the subject – Archenemy Russia?