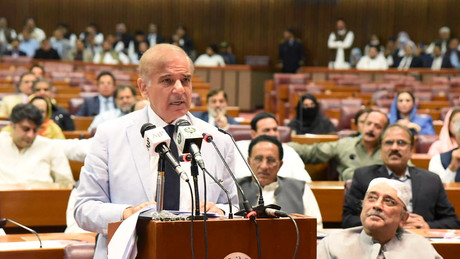 With Imran Khan as prime minister, an independent candidate prevailed against the elites for the first time in Pakistan. With Shehbaz Sharif, a political clan is now coming back to power. The developments are undoubtedly the aftermath of the Ukraine conflict. Khan had long since messed with the United States.

an analysis by Seyed Alireza Mousavi

Following an unusual and spectacular no-confidence vote against Imran Khan, Pakistani opposition leader Shehbaz Sharif was elected Prime Minister on Monday by 174 out of 374 votes. Khan’s ruling party Pakistan Tehreek-e-Insaf (PTI) had announced a mass resignation from parliament before the vote. MPs from Khan’s party boycotted the voting session and announced their withdrawal from the National Assembly. The impeachment of former cricket star Khan marked Pakistan’s first prime minister to fall in a no-confidence vote. On the night of the vote on Monday, tens of thousands of people across the country protested against the impeachment of former Prime Minister Khan.

Khan entered this system as an outsider in 2018. With Sharif, the old and corrupt party blocs are again taking over the government. The opposition parties Pakistan People’s Party (PPP) and Pakistan Muslim League (PML-N) recently temporarily buried their old enmity to overthrow Khan. Not only did they manage to win over Khan’s main coalition partners, but they also persuaded scores of MPs from Khan’s PTI to vote in favor of a motion of no confidence in their government. Sharif is the younger brother of Nawaz Sharif, who has been in power as prime minister three times before, but recently fell over corruption charges and lives in exile in London. The fact is that the two camps in the new government joined forces tactically to work towards Khan’s ouster – despite being political rivals. Khan is neither part of the PML-N around the Sharifs, nor does he belong to the PPP around the Bhuttos.

The mainstream in the west launched a campaign against Khan in recent days, with opinion leaders suddenly interested in the economic situation in Pakistan in the wake of the COVID-19 pandemic. Khan was unable to get the worsening economic crisis under control, which is why, according to the Western media, he deserved his impeachment. However, the “economic crisis” in Pakistan was only used to distract attention from the main conflict in Pakistan. Pakistan stands at the crossroads between a pro-Western militaristic system and a state order oriented towards the East.

In Pakistan, the military has long been pulling the strings in the background. Without the green light from the military, Pakistani opposition leaders would not have been able to overthrow Khan. Since the birth of Pakistan around 75 years ago, the army has ruled the country, which separated from India after the British colonial power withdrew. Army chief Qamar Javed Bajwa and Imran Khan had reportedly fallen out recently. The army chief wants to maintain and develop ties with the US, as he prefers Western equipment and training. The US also did not trust Khan because of his pro-Taliban sympathies and his refusal to wage war for the Americans on Pakistani soil.

The Ukraine conflict, however, exposed the internal divisions in Pakistan. Khan has fallen out of favor recently for meeting Russian President Vladimir Putin in Moscow: the Pakistani leader landed in Moscow on the very day the Kremlin launched its military operation in Ukraine. Khan’s meeting in Moscow caused a sensation as his visit to Russia was the first by a Pakistani prime minister in 23 years. The Americans had also let him know at the time that he had crossed a red line.

Under the Khan government, Pakistan has long been oriented towards the East. While the country has been backing away from US ambitions in the region since 2018, Washington is eyeing the strategic partnership between Islamabad and Beijing with suspicion. The election of Sharif as the new prime minister commented the Friedrich-Ebert-Foundation in Islamabad with the words that the USA and the EU are important trading partners that Pakistan cannot do without in its economic crisis: “Sharif must improve relations with the West without China and recently also Moscow upset. It’s going to be a tightrope act,” the foundation continued.

Criticism of the influence of foreign powers and international institutions was a key part of Khan’s campaign that brought him into government in 2018. The former Prime Minister has repeatedly stated in recent days that the United States had organized the vote of no confidence against him in Parliament. Khan mobilized tens of thousands of supporters in mass protests in several major cities over the weekend. After his removal from office, he also fueled protests with the accusation that the country was now getting an “imported government”.

The latest developments in Pakistan are undoubtedly the aftermath of the Ukraine conflict. During his visit to Moscow, Khan and Putin discussed the start of construction of the Pakistan Stream, a pipeline designed to transport liquefied natural gas (LNG) from Karachi to Punjab. Ironically, at a time when the West is trying to impose an oil embargo on Russia. After major non-Western countries refused to follow the West in isolating Russia, the US scrambled to bring Pakistan “in line” in the region to balance Russia and the West in the Middle East to restore. But Khan is not giving up and wants to return to power as soon as possible. Among other things, he concentrated all his strength on the road. Turbulent times are waiting for Pakistan, which will shape the new architecture of Asia.

More on the subject – Power shift in the Middle East: Pakistan is orientated towards the East