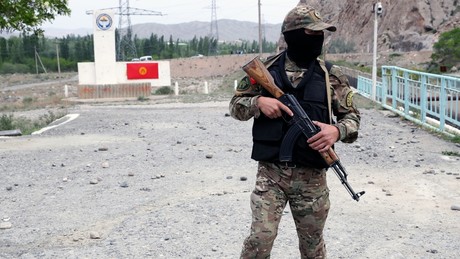 According to the Kyrgyz border guard, a Tajik border guard ignored the request to stop and entered 20 meters into Kyrgyz territory. There was an exchange of fire with mortars. Tajikistan has not yet commented on the incident.

A Kyrgyz soldier was wounded in an exchange of fire between Kyrgyz and Tajik border guards. This was announced by the Border Guard Service of the State Committee for National Security of Kyrgyzstan. In which report is it[called:

“On April 12, 2022, there was an incident involving weapons on the Kyrgyz-Tajik section of the state border. A Kyrgyz border guard was on duty in the Selkana area of ​​Leilek district, Batken region of Kyrgyzstan. Tajik border guards appeared on the adjacent territory, and when they saw the Kyrgyz soldiers, they continued to move towards the conditional state border.Ignoring their request to stop and move away from the dividing line onto their own territory, the Kyrgyz border patrol crossed the border 20 meters into Kyrgyz territory in.”

The Kyrgyz side “had to fire warning shots to prevent the Tajik border guards from penetrating deeper into the area”. The Kyrgyz Border Service added:

A Tajik soldier was wounded by gunfire in the incident. The Kyrgyz border guard service later reported to the 24.kg newspaper that a second exchange of fire in the area lasted 30 minutes. According to them, the Tajik side began shelling the Kyrgyz village of Dostuk with mortars.

The Tajik authorities have not yet commented on the incident.

Another escalation on the Kyrgyz-Tajik border has been ongoing since late January, when a firefight between border guards killed two Tajik soldiers and wounded six others, while eight Kyrgyz soldiers were wounded.

The delegations of Tajikistan and Kyrgyzstan then agreed on a full ceasefire at the border and the withdrawal of additional troops and equipment previously stationed at the conflict site. Despite this, occasional exchanges of gunfire continued at the border.

Armed clashes have erupted on the Tajik-Kyrgyz border in recent years. The last major clash took place at the end of April last year. The trigger of the conflict was the installation of cameras on a disputed area – near the Golovnoy water distribution point. As a result, the militaries of both countries intervened.

More than 180 Kyrgyz citizens were injured in the conflict, according to the Health Ministry. 34 people died. Tajikistan did not provide official figures on the casualties of the conflict.

The border between Kyrgyzstan and Tajikistan is 970 kilometers long. There is no agreement over 460 kilometers, so conflicts regularly arise when both states assert their claims to a certain section.