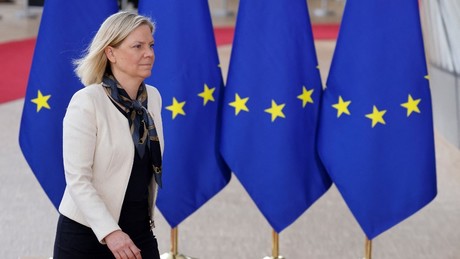 The ruling Social Democrats in Sweden want to start an internal debate about the country’s strategic direction and possible NATO membership. In Finland, too, the voices for joining the military alliance are increasing.

The Swedish minority government under Social Democratic Prime Minister Magdalena Andersson wants to start an internal debate about the country’s strategic direction and possible NATO membership. Andersson, who is also the leader of the Swedish Social Democratic Labor Party (SAP), announced this on April 11.

It will be “a broader discussion than a yes or no question about joining NATO,” said Tobias Baudin, the Social Democrats’ number two, in a statement. According to the politician, the “security policy dialogue” should be completed by the summer.

Prime Minister Andersson said at the end of March that she “does not rule out” a candidacy for the western military alliance, although she had initially expressed her preference for Sweden to remain outside of military alliances. The Swedish Social Democratic Party, historically opposed to NATO membership, passed a motion to this effect again at its last party congress.

Support for accession is growing in Sweden and Finland

Nevertheless, Andersson agreed to change the line five months before the elections, in which this issue will be central. A U-turn by Sweden’s largest party would be historic and pave the way for Sweden to join NATO; while neighboring Finland prepares to make its decision by summer. Like its Finnish neighbor, Sweden is not a NATO member and officially non-aligned militarily, although it is a partner in the Atlantic Alliance and abandoned its strict line of neutrality after the end of the Cold War. A candidacy for NATO, which was politically unthinkable two months ago, has become possible, if not probable, in view of Helsinki.

Support for accession almost doubled after the start of Russia’s offensive in Ukraine, rising to almost 50 percent in Sweden and 60 percent in Finland. The percentage of rejections dropped to 20-30 percent. The issue is expected to play a major role in the campaign for the next parliamentary elections in Sweden on September 11th. Conservative Ulf Kristersson, who leads the right-wing opposition, announced his intention to apply for membership if he wins a majority in parliament. And the far-right Sweden Democrats (SD), the third-strongest party in the 2018 elections, have also opened up to the idea of ​​joining after initial rejection. An internal meeting of the SD leadership on this question was convened for April 11.

At the end of February, Russia issued a clear warning to Sweden and Finland about a possible entry into the Atlantic military alliance. Russian Foreign Ministry spokeswoman Maria Zakharova said:

“All member countries of the OSCE, in their national quality – including Finland and Sweden – have confirmed the principle that the security of a state must not depend on the security of other countries. It is clear that the accession of Finland and Sweden to NATO, the first line, as you will understand, is a military bloc, would have serious politico-military repercussions that our country would have to respond to.”

More on the subject – Finland shows interest in NATO membership