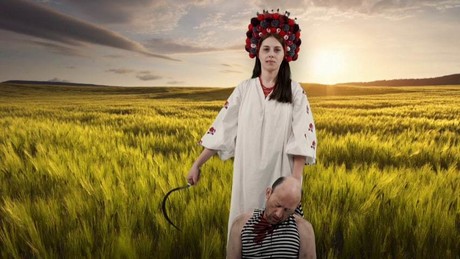 Russian criminal investigators will prosecute the Ukrainian actress, who in a video suggests ISIS-style execution of a Russian soldier and calls for the murder of all Russians. This was announced by the Investigative Committee of the Russian Federation in Moscow on Monday.

The Investigative Committee of the Russian Federation, the body responsible for investigating general criminal cases, opened a criminal case against a Ukrainian actress on Monday. In the video published over the weekend, the young woman read a text inciting violence against Russians and then indicated that a man kneeling in front of her would be cut with a sickle.

The video, which was circulated on Ukrainian social networks over the weekend, is strongly reminiscent of publications by the Islamic State (a terrorist organization banned in Russia and Europe) in which people’s heads were cut in front of the camera. The woman, who appears in Ukrainian national costume, was quickly recognized by social network users. The actress is Adrianna Kurilets-Kmetiuk from Lvov in western Ukraine.

Kurilets-Kmetiuk graduated from the Ivan Franko National University in Lvov and worked at the Maria Zankovetska National Academic Drama Theater of Ukraine in the same city. On social media, she presents herself as a theater and film actress as well as a teacher of acting and stage language. The actress, who imitates the execution of a Russian soldier and promises death to all Russians, has only played third-rate supporting roles in Russian TV series. In 2017, she had a brief appearance in an episode of the television series ‘Doctor on Call’, in which she played a girl who worries about a young man.

The director of the Center for Applied Sociology and Political Science, Gennady Podlesnyj, told Russian media that the authors wanted to use the video to fuel Ukrainians’ hatred of Russians and to intimidate the soldiers and their parents.

“This is information terrorism. Undoubtedly, the intent of intimidation is terrorism. They are not only concerned with eliminating a person or a state, but also with intimidation,” he explained.

“It’s extremism, incitement to hatred and enmity – and by doing so, it’s directly related to several criminal offenses, including incitement to murder for motives of ethnic hatred. So if something happens to Russian citizens now, we can assume that this actress instigated and at least is an accomplice”,