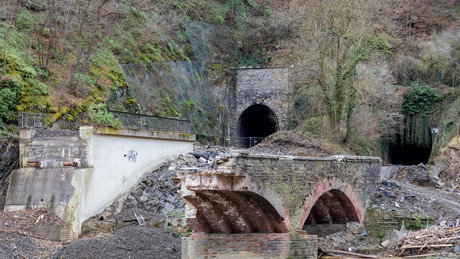 Anne Spiegel resigns. That does not mean that those responsible for the flood in the Ahr Valley are in any way responsible. Because it was a political, not a natural disaster that led to 134 deaths. And which clearly shows how little the citizens are worth to the rulers.

So now she has resigned, Federal Family Minister Anne Spiegel. Because of her vacation. What a false game, on all levels, what contempt for human beings.

The fact that Spiegel was even considered for a post as federal minister shows that the political caste of this republic no longer has any connection to a concept such as responsibility. Because the real crime of this lady is not the start of her vacation; this is just the usual feudal attitude towards the ruled that has now crept in. The real offense, remember, is disregard for the warning by the European flood warning system EFAS, which had already been available three days before the devastating flood, had named the affected areas with great accuracy one day before at the latest and which had nevertheless been completely ignored. the Consequence if 134 people died, most of whom would still be alive today, this warning would have been heeded and passed on. The responsibility lies with the then Rhineland-Palatinate Environment Minister Spiegel and the entire Rhineland-Palatinate state government.

Above all, Interior Minister Roger Lewentz would have been due, who was saved by making the district administrator of the Ahr district a pawn. At the meeting of the crisis team on the evening of the flood, this Minister of the Interior, after all the country’s person responsible for civil protection, was present, as was the district administrator, but for some reason his inaction had no consequences. In this capacity, he is responsible for several factors that contributed to the catastrophe. For example, the fact that rescue services such as the police only communicate via digital mobile phones, which unfortunately fail just like conventional phones when the power supply fails, while the previously common radio devices would still have worked, at least in part. Yes, this communication technology is now common nationwide and just as idiotic nationwide as in the Ahr Valley because it is not disaster-proof, but the responsible Minister of the Interior bears the political responsibility for this problem.

Prime Minister Malu Dreyer? Simste to her employees, after she had left work at seven the night before, shortly after eight in the morning after the flood: “I need a few sentences of sympathy.” This sentence could almost be written as a motto under a coat of arms for the current squad of politicians. Compassion is something that simulates technically, for which external knowledge must be used. Which is not surprising; Compassion and accountability are closely linked. When the steed I’m riding is high enough, I don’t have to worry about the rabble it’s trampling.

Almost nine months have passed since the flood and the Ahr Valley is still a landscape of ruins. In the small town of Marienthal, for example, not much has happened yet. “A third of the villagers currently live in built-up living containers, a third are housed away, and a third live on the upper floors of the otherwise destroyed houses.” So reported the Bonn Generalanzeiger not two weeks after the flood, but on March 31 of this year. The funds, which are said to have been quickly and unbureaucratically assured, have not even been applied for to a large extent. Which is not surprising when an appraisal of the value of a house is required required becomes, which no longer exists. “473 of 1,054 applications submitted in full were approved. A total of 2,100 applications (for around 8,000 buildings) were made, but half of them were incomplete.” like that expression by Prime Minister Dreyer at a panel discussion in mid-March.

But back to the small town of Marienthal. In the same article, which proves that none of the 100 inhabitants of this place is living normally again, a visit by a state secretary from the Rhineland-Palatinate Ministry of the Interior in Marienthal is described, in which she praises the (still unrealized) plans for reconstruction, which should include a multi-generation house and a green lane separation of the federal highway to reduce speed. “It is deeply moving how committed the reconstruction is being tackled here. They took the opportunity to make the best of the disaster and the new beginning that came with it.”

That best is in plans, nothing but plans, almost nine months after the flood. And the Secretary of State’s reaction would be in any halfway normal society under the headline: “Those who have suffered the damage need not worry about the ridicule”. Presumably those responsible for sympathetic statements were off duty that day, or only available to the higher-ups. How cynical such a reaction is, how absurd in view of the size of this country and the opportunities it actually has, was not noticed by the reporter for the Generalanzeiger.

The whole crime, the colossal failure of the state, which is found in dealing with the Ahr valley flood, is somehow not really visible to this day. There were these twelve residents of a home for the mentally handicapped in Sinzig, which was located in a designated flood risk area, who were not evacuated even though the district had prepared emergency shelters early in the evening; they were left to drown miserably at half past one in the morning. Don’t let anyone tell me that it wasn’t a crime and that nobody should be held accountable. Twelve dead in one building alone, and 123 in other places. If this country were a living democracy, it should have been shaken to its foundations by this event. To this day, it should be horrified at the measly aid provided and the incredibly long time it takes to rebuild. The railway line through the Ahr Valley is scheduled to go back into operation in 2025. If all these calculations are not killed by the sanctions regime; After all, building materials are now significantly more expensive, and it is not certain how long the power grid (on which, I would like to remind you once again, all civil protection services depend) will be reliable. But who cares about the question of whether something is being built or rebuilt in this country?

Because while the political system fails at every task that is somehow material and concrete and linked to the well-being of the citizens, it is not only the handing over of tax money to the pharmaceutical or defense industries that works excellently, in the billions. They don’t have to provide expert opinions or make complicated applications either; the goods being sold don’t even have to work, like the infamous US F-35. But what works above all like clockwork is the media control of reality.

Just think back to last summer. There was talk of the 134 dead in the Ahr Valley, but there were no pictures. Not from injured people in the hospital. Not from grieving relatives. Not even from the graves. Buildings only. The events were told with a sobriety completely different from what is customary when one’s own political personnel are not in charge. Not even the anger that must be there in the victims of the disaster, after nine months in shelters, finds its way in front of television cameras. Let alone confronting the responsible politicians with it. As soon as it became clear that it was not a “consequence of climate change” but rather a failure of the state, less effort was made to report about it, let alone emotionalise it in a targeted manner. Everyone can check this for themselves if they think about what image comes to mind when they think of the term Ahr valley flood. No people.

Otherwise it would not be possible for Spiegel to ever become federal minister and for her not to resign because of her real responsibility for 134 dead German citizens, but because she was going on vacation two days after the flood. And that a Prime Minister Dreyer says such sentences in front of an investigative committee of the state parliament, and is not immediately chased out of office with insult and disgrace. 134 dead on the account of the Rhineland-Palatinate state government, and nobody calls them criminals who have innocent citizens on their conscience. No one dumps loads of flood mud in front of the seat of the state government or the state parliament, no one simulates the dead; Not only is media sympathy turned down to anti-freeze level, there are also no political stagings for the media. These 134 are probably not worth outrage. Just as little as the destroyed Ahr Valley. Just as little as all of us in this zombified republic, where real failure is part of everyday life on all levels, but big sayings and arrogance to the outside world always have their place. The whole country threatens to follow the example of the Ahr Valley.

More on the subject – The coming collapse: The German mistress at the burial of the US prince