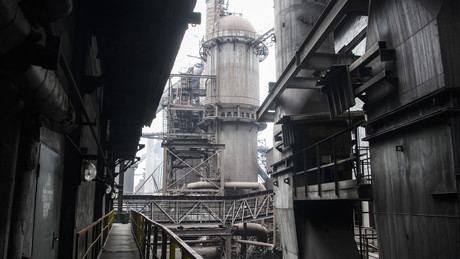 Western politicians have been claiming for weeks that Russia could use chemical weapons in Ukraine. On Monday, the Ukrainian neo-Nazi Azov Battalion reported an alleged Russian poison gas attack. There are no official confirmations for this.

Ukraine’s neo-Nazi Azov Battalion has accused Russian forces of using poison gas during the siege of Mariupol. Unconfirmed reports about this were published by the ultra-nationalists on Telegram. Accordingly, on Monday “a toxic substance of unknown origin” was sprayed from a drone and would have caused shortness of breath, dizziness and headaches in three fighters.

Meanwhile, Pyotr Andryushchenko, an adviser to Mariupol’s mayor, announced on his Telegram channel that there was no confirmation of a poison gas attack.

At the same time, the Ukrainian parliament in a tweet on Monday accused Russia of shelling nitric acid tanks in the Donetsk region. The Verkhovna Rada referred to a police patrol report and asked residents to prepare protective masks soaked in a soda solution.

Western officials took these accusations as an opportunity to threaten Russia with harsh consequences. British Foreign Secretary Liz Truss announced that she was investigating the details “with partners”. She announced:

“Any use of such weapons would be a cruel escalation of the conflict, and we will hold Putin and his regime responsible for this.”

Pentagon spokesman John Kirby also said that the situation in Mariupol was being monitored.

Weeks earlier, US, British and Ukrainian politicians had made allegations of possible Russian use of chemical or biological weapons in Ukraine. For example, as recently as last month, White House spokeswoman Jen Psaki dismissed Russian reports of US-funded bio-laboratories in Ukraine as an “obvious ploy” and instead warned that Russia could potentially use chemical or biological weapons in Ukraine. Ukrainian President Vladimir Zelensky repeated these claims in his video address on Monday, calling for tougher sanctions on Russia so as not to hear “even words about weapons of mass destruction” from Russia. An oil embargo against Russia is “a must”.

Moscow has previously warned that claims of alleged Russian use of chemical weapons could be used as a pretext by the US and its Western allies to fuel the conflict in Ukraine.

More on the subject – A Proven Weapon: How to Control the “Massacre” Narrative