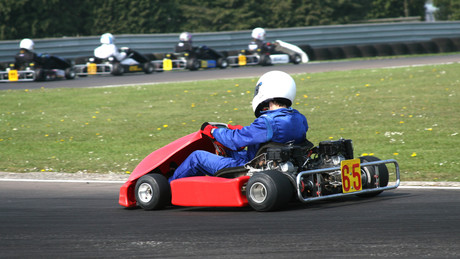 A 15-year-old racing driver from Russia celebrated his victory at the European Kart Championship in Portugal with a gesture that can be interpreted as a Nazi salute. This has far-reaching consequences for the athlete.

The 15-year-old Russian Artjom Severukhin was previously little known, even among motorsport fans. Now everyone is talking about his behavior at an award ceremony in Portugal and will probably cost the young athlete his career.

Severukhin competed at the European Kart Championship in Portimão and won. On the podium, during the Italian anthem, he showed the salute reminiscent of that of the German Nazis. Videos on the Internet show Severukhin raising his right arm, stretching out his hand and laughing.

The award ceremony was broadcast on the FIA’s YouTube channel, but the recording was removed shortly afterwards.

In a video on Instagram excused the racer himself for his behavior. He never supported National Socialism and considers it one of the most terrible crimes against humanity. “The guys showed me in front of the podium that in Italy it’s customary to hit your heart to show your gratitude. I just wanted to show that gesture. I can’t explain how everything else happened,” he said 15 year olds in English and Russian. “I know I’m guilty, I know I’m stupid, and I’m ready to be punished.”

The Ward Racing team announced that it would part with the young talent. Ward Racing condemned “Artyom Severukhin’s personal actions during the award ceremony,” the team wrote on social media on Monday evening, speaking of a “manifestation of unsportsmanlike conduct” and an “unacceptable violation of the ethical and moral code of sport.” Therefore, the contract with Severukhin will be terminated.

The world automotive association FIA had previously announced that it would initiate an investigation into “unacceptable behavior”.

Due to sanctions, the athlete competed under the Italian flag. The World Federation had banned Russian and Belarusian racers from competing under the flags of their countries and from holding international competitions in Russia and Belarus. In addition, Russian and Belarusian racing drivers had to sign a declaration of commitment to the principles of peace and political neutrality. In the world association’s document, the athletes had to agree, among other things, to a ban on showing Russian or Belarusian national symbols or flags in public or on social networks. In addition, they had to agree not to use the words “Russian”, “Belarusian”, “Russia”, and “Belarus” on uniforms and racing cars, and not to perform their countries’ national anthems.