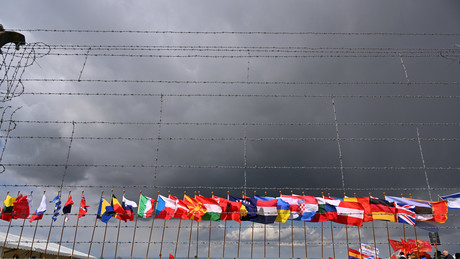 In Buchenwald, before the commemoration ceremony on the anniversary of the liberation of the concentration camp, the Belarusian flag was replaced by that of the opposition. Belarus says the swap is a mockery of the victims of World War II. The flag had already been used by Nazi collaborators.

Belarus launched criminal investigations on Monday after the country’s flag was replaced with one used by the opposition at a commemoration event at the former concentration camp in Buchenwald.

Minsk insisted that it was unacceptable “to trample on the memory of all the Belarusians who lost their lives in World War II and the tens of thousands of Belarusian prisoners in concentration camps.”

The flags were exchanged before an event held to mark the 77th anniversary of the liberation of Buchenwald concentration camp. It was held on Monday, but delegations from Belarus and Russia were not invited because of the conflict in Ukraine.

The images of the demise of the red-green Belarusian national flag and its replacement with a red-and-white flag, made internationally famous by the 2020 and 2021 anti-government protests, circulated on social media and did not go unnoticed in Minsk.

They led to the German ambassador to Belarus, Manfred Huterer, being summoned to the Foreign Ministry on Monday.

On the anniversary of liberating the Buchenwald concentration camp, which housed many, including Soviet prisoners, they removed the flag of Belarus. The flag was replaced with the white-and-red WWII Nazi collaborationist flag from the area (also used by the opposition). 🤦🏻‍♀️ pic.twitter.com/RaV8WCFEwB

The diplomat was told that, given the “suffering of the Belarusian people at the hands of the fascist invaders” and the contribution of the nation as a whole to the victory over the Nazis, “such actions by the German side cannot be justified in any way, especially by any instantaneous or opportunistic reasons”.

On the same day, the Office of the Prosecutor General of Belarus opened an investigation into incitement to hatred against people over the incident in Buchenwald, which is now a museum and memorial.

Prosecutors sounded similar to the State Department, calling the flag swap a “cynical” act that “debases the honor and dignity of the Belarusian people” and “mocks the memory of millions who died on Belarusian territory” during World War II.

According to Belarusian law, the corresponding article of the penal code carries a penalty of three to ten years in prison. Investigators have yet to identify a suspect and say an “unidentified person” swapped the flags.

Buchenwald was one of the first concentration camps opened by the Nazis. It operated from 1937 to 1945 and more than 76,000 people are estimated to have died there.

No troops from Belarus are taking part in the fighting in Ukraine, but Minsk is still internationally condemned and sanctioned for being Moscow’s ally and allowing Russian troops to march through its territory.

The red-and-white flag that has become the symbol of the Western-backed opposition has a rather controversial history. Originally it was created for the Belarusian Democratic Republic, a self-proclaimed state that existed only from 1918-1919. The same flag was later used by Belarusian Nazi collaborators in World War II.

These were led by Radoslaw Ostrowsky, who later emigrated to the United States, and helped with the Holocaust. Today, this flag is used by supporters of Western-sponsored activist Svetlana Tikhanovskaya.

More on the subject – “Servants of the Third Reich: Belarus sent protest note to Ukraine over “Bandera March”