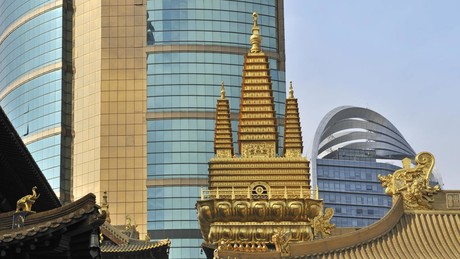 To the surprise of Western analysts, Chinese exports in March remained at an astonishingly high level despite the Ukraine war and the Corona situation. At the same time, the price of gold – as is so often the case in times of inflation – is rising significantly and is about to break the 2,000 US dollar mark.

Like the Handelsblatt on Wednesday reported, despite the war in Ukraine and the Corona situation, China’s exports grew significantly in March. Exports increased by 14.7 percent compared to the same period in 2021.

Economists consulted by Reuters had only expected growth of 13 percent after growth of 16.3 percent in January/February. Imports, on the other hand, remained comparatively constant, shrinking by just 0.1 percent. That was the first drop since August 2020, following growth of 15.5 percent in January and February this year.

However, analysts assumed growth of eight percent, which means that domestic demand has decreased. It remains to be seen whether Chinese exports will fall as a result of the Ukraine war. For example, Shenzhen Muchen Technology chief executive Qi Yong told Reuters that export orders from its European customers fell 20 percent in March from a year earlier. Another indicator, on the other hand, is pointing upwards: After the leading Chinese stock exchange recorded a big minus in 2021, the Hong Kong Hang Seng Index has gained almost ten percent in the last four weeks.

On the other hand, while European equities and bonds in particular are falling, gold in particular is benefiting from the current mood of crisis. The precious metal has risen by two percent since the beginning of April and was trading at around $1,980 on Wednesday (1,826 per troy ounce, ergo 31.1 grams). The world equity index MSCI World is according to the Handelsblatt fell by two percent in the same period, the price of ten-year US government bonds by more than three percent.

The economist Jeffrey Halley, analyst at the online broker Oanda, sees either a current unjustified gold hype or a glossing over of the overall situation by the press. He means:

“First, gold is in demand as a safe haven asset, as evidenced by the spike in ETF purchases since the start of the Ukraine war. […] Second, gold lives up to its reputation as a stable investment in times of high inflation all honor.”

Inflation has been rising worldwide since the beginning of 2021. In the USA, the rate of consumer price inflation reached 8.5 percent in March 2022, a new high for more than 40 years. As a result, gold, like silver, is currently benefiting from its reputation as an inflation hedge.

The financial experts at Goldman Sachs see a scenario in which an ounce of gold could rise to $2,500, i.e. by a quarter, over a twelve-month period. Goldman assumes that inflation will continue to rise. In her opinion, the market has not yet priced in slower growth in the US economy. But that is necessary to curb inflation. Last but not least, this is also a reason why the precious metal has tended to rise during interest rate hike cycles in the past, according to the analysts at the major US bank.

Another development of the current gold high is often left out by Western analysts: The Russian central bank began to massively expand its gold purchases at the end of March: The regulator is doing this at a fixed price of 5,000 rubles (59 US dollars) per gram between March 28 and 30 June, raising the possibility of Russia returning to the gold standard for the first time in over a century – not least, it could also set a pattern for other economies where the US dollar, the world’s number one currency, would automatically weaken further .