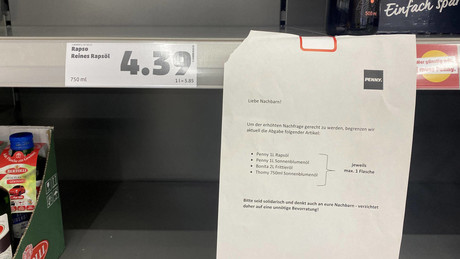 According to the Vice-Secretary General of the German Farmers’ Association, consumers in this country have to get used to the fact that not everything is always as cheap and available in large numbers as it used to be. Less prosperity is also to be expected due to higher armament spending.

It is already evident in the empty spaces on the shelves – where cooking oil, flour and goods made from it or even toilet paper were actually to be found. The availability of certain products seems to change. At the same time, the demand for cooking oil and flour in Germany increased due to the Ukraine war. According to data from the Federal Statistical Office, sales of cooking oil in food retail in the week from March 7th to 13th were more than twice as high as in September 2021. For flour, demand even tripled in the same period. Russia and Ukraine are among the most important grain exporters in the world. Ukraine is also a major producer of edible oil, especially sunflower oil.

Despite the Russian export stop for grain, there will be no problem with the supply in Germany in the medium term, said the Vice President of the German Trade Association (HDE), Björn Fromm, on ZDF.

Udo Hemmerling, deputy general secretary of the German Farmers’ Association, explained in an interview with Der Spiegel that there is no need to worry about a shortage of flour in this country. Because flour is mainly made from local grain or comes from the Czech Republic or France. “We have so much grain in Germany that we export eight million tons of wheat to North Africa and Arab countries every year.”

However, there is indeed a problem with sunflower oil in terms of availability, because a lot of it comes from Ukraine. “But rapeseed oil is a good alternative. And we have enough from local cultivation,” said Hemmerling.

Overall, the tendency of consumers to buy hamsters makes availability more difficult. For example, pork producers have adapted to the low prices – pig farming has declined. Now the prices have risen again, but the feed has also become more expensive, the production is not worthwhile. That’s why it can happen in the barbecue season “that there isn’t always a schnitzel on the shelf when demand increases.”

“This is not yet a supply bottleneck.”

Then there is consumer behavior: “If word gets around that chops are scarce and everyone quickly fills the freezer compartment, then this hamster effect occurs again and there are even fewer goods there,” warns the expert. For the most part, feed for cattle comes from domestic cultivation, but this is different for poultry:

“But when it comes to protein feed or corn for poultry, supply bottlenecks caused by the war and logistical problems as a result of the corona pandemic play a role. In the end there is always feed, but at a very high price.”

There is also a shortage of truck drivers in the EU, many of whom are from Ukraine and are now fighting there. Packaging material is also sometimes scarce.

“We don’t really have a shortage of supplies. But we have to get used to the fact that not everything is always available.”

With regard to this year’s harvest, Hemmerling gives the all-clear that it will probably be average, since most of the mineral fertilizers, which are mainly imported from Eastern Europe, have already been bought. But if the gas supply were cut or rationed in the EU, we would have a serious supply problem with fertilizers, says the expert:

“In the worst case, we would have to expect a third less grain harvest in 2023. Then bread grain and vegetables would be significantly more expensive because the quality here depends directly on fertilization.”

Der Spiegel recently stated: “Words that have played no role in German reality for a very long time are returning: renunciation, deprivation, willingness to make sacrifices, lack.” According to the former Federal President Joachim Gauck, sacrifices can be made in this country. “We can also freeze for freedom. And we can endure a few years that we have less happiness and zest for life,” announced the former president, who has a comparatively high income with an honorary salary of more than 210,000 euros per year , in the ARD talk show Maischberger.

According to surveys, many people in Germany are already restricting themselves. According to a survey by the British survey institute YouGov on behalf of Postbank, around one in seven adults can hardly afford to pay for living costs in view of the rise in inflation – 7.3 percent in March. Almost 24 percent of those surveyed from all households with a monthly net income of less than 2,500 euros stated that they were hardly able to cope with regular expenses due to higher prices. In January, 17 percent of this group said so. Inflation eats away at people’s purchasing power.

The federal government has put together two billion-dollar packages to relieve people in the face of energy and fuel prices. In the long run, however, the state will not be able to fix it with money alone. “The Ukraine war is making us all poorer, for example because we have to pay more for imported energy,” Lindner, a FDP politician and finance minister, told Bild am Sonntag in early April. “Not even the state can compensate for this loss of prosperity.”

“Another consequence of the Ukraine war is the end of the peace dividend in the form of falling defense spending,” analyzed Ifo President Clemens Fuest. The defense budget is significantly increased. “That means cuts in public services in other areas and higher taxes, so ultimately less prosperity,” said Fuest.

According to Deutsche Bank fund subsidiary DWS, after the trade dispute between China and the USA and the Corona crisis, the Ukraine war is the third major setback for globalization and global supply chains in recent years. The political scientist Philipp Lepenies recently stated that the “euphoria for globalization” of the 1990s, as he calls it, is waning.

“The neoliberal market narrative assumes that the highest degree of freedom is that of free consumer choice,” said the head of the research center for sustainability at the Otto Suhr Institute of the Free University of Berlin on the SWR2 broadcaster. All of a sudden, the state and citizens would have to “clarify the consequences of their own consumption much more dramatically than ever before.”

For decades, Germany benefited from free world trade, which provided access to cheap products and raw materials. This, along with other factors, kept inflation rates at a comparatively low level.