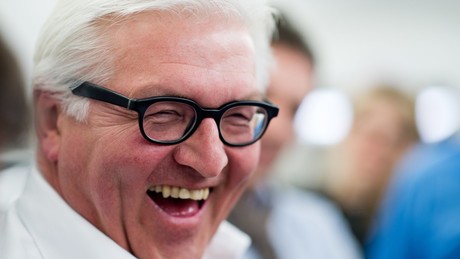 I can’t really sympathize with Federal President Frank-Walter Steinmeier if Selensky doesn’t want to invite him. After all, Steinmeier helped touch on this whole Ukrainian misery. And if the snake that he was feeding on his breast bites him now – well.

Even if it is astounding how the representatives of this bankrupt state, of this Nazi-infested pseudo-democracy, are playing themselves up to Western European representatives. If the federal government weren’t so drunk on its own propaganda that you have to show unconditional solidarity with Ukraine, then it would now be appropriate to stop all services from Germany. Eventually Zelensky allowed himself to insult the highest representative of the German state; and that after the Ukrainian ambassador Melnyk had been behaving for weeks as if the Federal Republic were the colony and the Ukraine the colonial power.

Of course, with the decision to implement the insane package of sanctions, the plug was pulled from the economic power of Germany. Voluntarily. And whoever does that cannot be expected to understand anything. Because it is clear that there is no longer any perception of what strengths and weaknesses of countries are based on; that it has a lot less to do with shouting and a lot more to do with economics. In such a way that the act of submission represented by the rejection of Nord Stream 2 is subsequently the surrender of any claim to power, because without industry there is not much left of Germany than a country without raw materials and without prospects.

Not that I ever welcomed Berlin’s stranglehold on its European neighbors. The EU had long since turned into a bloc in which elections were as irrelevant as laws, because in the end what was decided in Berlin happened anyway, and only those who were acceptable in Berlin could govern. In this respect, Germany’s economic decline is an opportunity for our neighbors to rediscover democracy. But there are a few intermediate stages between schoolyard bullies and doormats, and somewhere in between there is a normal country with neighborly relations between equals.

Only what this Zelenskiy troupe is delivering is definitely a world-historical innovation. A country totally dependent on the philanthropy of its Western sponsors, whose constitution should make anyone who even knows half a clue shudder to walk away, and which is on the verge of losing a war to whom it has begged for eight years, whose government does not even have the decency to let its own soldiers capitulate in hopeless situations (anyone who knows German history knows which political tastes behave in this way), which is no longer economically on the gums, but walks on the jawbone, almonds and makes demands. And the Berlin garden gnome squad put up with it.

Well, Steinmeier could hit back badly. After all, he knows exactly what happened in Odessa back in 2014. He should know of many more skeletons in Kiev’s basements. After all, it is highly unlikely that when he was foreign minister there was no clear understanding of who he was dealing with in Ukraine. It would be a good opportunity to chat a little. For example, about the Ukrainian crimes in Donbass. About the true character of troops like Azov. One sentence would suffice as an introduction: “Actually, it’s quite fine with me not to meet Mr. Zelensky.” And then maybe a sentence or two afterwards, about the role played by his financier and backer Igor Kolomoiski.

That would be exciting. Then one could see how tenable the narrative is that Ukraine is the innocent victim of Russian aggression. Steinmeier could really do some good for this country, for Germany, because of course the sanctions against Russia would no longer make sense if the truth were on the table, which could just about prevent the planned downfall. And at the same time he would do a great service to Ukraine, which has a right to escape from the terror of these Nazi troops. If he’s not capable of doing it out of political decency, perhaps his hurt ego will help now.

After all, Steinmeier personally held the protective hand over this abominable power in Ukraine. He was involved in the negotiations on the Minsk agreements and then consistently misrepresented them to the press. For example, Ukraine should be given control of the border with Russia before autonomy regulations and electoral laws are agreed between Kyiv and the Donbass republics. He never criticized the Ukrainian side’s refusal to implement it.

Not to forget that he would have had it in his hands to slow down the coup in February 2014. As? Quite simply: by not recognizing the coup government and insisting on the agreement that had been reached exactly the day before, again with his participation. Had he done that and demanded that early elections be held in Ukraine as agreed in May 2014, but that the Yanukovych government is the legitimate government of Ukraine up to this point – then there would have been no circus, no announcement, the Russian language to be deleted, not Yarosh’s threat to invade Crimea, which in turn provoked massive resistance there and first for barricades, then finally for the referendum.

As you can see, Selensky should basically be grateful to Mr. Steinmeier. But because he doesn’t see through the fact that Steinmeier had deceived the Germans for years with apparent peacefulness while actually supporting the Ukrainian power until they could finally be put on a course for war, the Kiev would-be Mussolini should actually kiss his feet. Even on behalf of his American clients, who without Steinmeier’s involvement would never have gotten as far as attacking Russia and Germany at the same time with a single chess move. Although it is quite possible that the damage on the German side is greater.

When it comes to what Steinmeier knew and didn’t know, one must never forget that long before he became foreign minister under Merkel, he was already head of the chancellery under Schröder. The main function of the head of the chancellery is called “intelligence coordinator”. This means that all the information that all of Germany’s “services” throw off flows together at this point, and anyone who has ever sat at this point knows how to get such information and how to evaluate it.

Wanna bet? Steinmeier, as foreign minister, already knew when he signed this worthless agreement with Yanukovych in February 2014 that Ukrainian Nazis were dominating the Maidan and that the weekend before there had been a raid on buses from Crimea near Korsun, during which several anti-Maidan -Demonstrators were murdered. He knew about the funds from the Konrad Adenauer Foundation that had flowed to Svoboda and the “Ukrainian Democratic Alliance for Reforms” (UDAR). It is very likely that he himself knew about the training camps for the Maidan Nazi thugs in neighboring NATO countries. And when he revisited Ukraine in May 2014, he certainly knew all about the Odessa massacre, down to the smallest, hideous detail.

Therefore he is jointly responsible for the dead on both sides of this war, which he could have prevented several times and in several ways. I would fully understand it if neither a Ukrainian anti-fascist (they must never be forgotten, nor what they have to endure; in Kyiv alone, 600 people are said to have disappeared in the last few weeks) nor a Russian wanted to shake his hand .

But Zelensky? And with the accusation that Steinmeier was “too pro-Russian”? Admittedly, even the German Nazis were not really grateful to those Social Democrats who prepared their way to power by calling for Hindenburg to be elected Reich President, or who even called for the ADGB to celebrate May Day together with the Nazis in 1933. Nevertheless, on May 2, 1933, the union buildings were stormed, and these functionaries also ended up in the concentration camps. Is there something ringing, Mr. Steinmeier? I just mean because of the May 2nd date and the Trade Union House in Odessa.

Unfortunately, it is to be feared that Steinmeier won’t get carried away and won’t mention the corpses in the Kiev cellars. After all, the entire West German SPD is a descendant of just that part of German social democracy for which, despite the experiences of the Nazi era, anti-communism was more important than anti-fascism; the other part of this party was merged into the SED. And the right wing from which Steinmeier descends cultivated its hatred of Russia particularly thoroughly.

Which is really a shame. Not only because it should be the last opportunity for Frank-Walter Steinmeier to do something really useful in world history. But also because it would be so entertaining to watch him untie one packet after the other and burst all the war propaganda in this country like a soap bubble. You could really grab a month’s supply of nibbles and beer, put your feet up and have fun.

Unfortunately, that won’t happen. Rather, Steinmeier will discover his capacity for suffering and will sacrifice the last remnant of his personal dignity for the high goal of loyalty to his vassals; Zelensky will continue to be Mussolini until the last unit of Ukraine’s military is wiped out, then retreat to his villa in Italy. And for both Ukraine and this Germany, the awakening will come only after another crash. Difficult and painful. Sometime after the war crimes trials, when all the gruesome facts that the previous Ukrainian murder videos already suggest will be on the table.

More on the subject – The truth about Ukraine and the question: what do we owe her anyway?