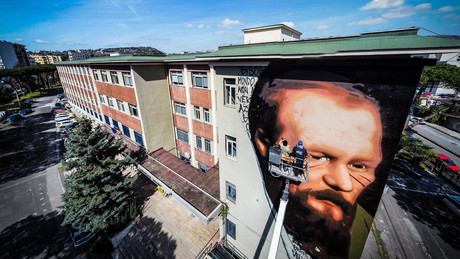 “A laugh will bury you” is a revolutionary saying in Italy. And the satire against the anti-Russian agitation by politicians and the mainstream media runs non-stop on Italian social networks today.

The most recent example concerns the words with which Italian Prime Minister Mario Draghi on April 6 justified the proposed sanctions against Russian gas:

“What do we prefer? Heat on – soon also the air conditioning – or peace?”

This was followed by the internet meme Condizionatore e Pace (“Air Conditioning and Peace”), which alluded to the world-famous title of Tolstoy’s masterpiece.

Behind this satire is on the one hand sympathy and support for Russia, also for what Russia represents in the eyes of these Italian citizens: sovereign politics, conservative family values, resistance to the Great Reset and more. Accordingly, these Italians also perceive the Ukraine conflict as a kind of conflict against globalization. On the other hand, it is also an expression of the desire to once again cultivate good relations with Russia, and therefore also of outrage towards the politicians who unnecessarily disrupt these relations.

Even the Russian Foreign Ministry has noticed this:

💬 #Zakharova: We receive a huge number of letters from Italians expressing solidarity with Russia’s actions.🇷🇺 🤝🇮🇹 We value that Italian people do not let themselves be deceived by biased media & even in the most difficult times make efforts to maintain close ties with Russia pic.twitter.com/ipOy7p2BlR

Politicians and the media – both in Italy and in the EU – are known to be calling for a boycott of Russian gas in order to position themselves against the Russian military operation in Ukraine.

Headlines such as “Leave the stove off as a sign of protest against Putin’s war” were already circulating in the Italian mainstream media in mid-March.

Then satire also attacked on social media: on Twitter there was a trend with the hashtag #UnCarroArmatoPerPutin [“EinenPanzerFürPutin”]. This went viral and even caught the attention of RT boss Margarita Simonjan. About it reported on 29.3. Italy’s second largest daily newspaper La Repubblica in one video post:

The campaign is a fake, according to La Repubblica. What the Italian daily ignored, however, was the satirical nature of the #UnCarroArmatoPerPutin campaign. Because a clear one majority (57%) of Italians are both AGAINST arms sales to Ukraine and increasing military spending.

The fact that the campaign is already bearing fruit proved on March 30, Italy’s largest daily newspaper Il Corriere della Sera with its headline “Why are there so many pro-Russians in Italy?”.

One possible answer would be: because Russophobia never existed in Italy, and trying to artificially create it in a few weeks backfired.

Warmongering “Not in Our Name”

For weeks, many Italians have been turning to the Russian embassy in Rome to personally distance themselves from the anti-Russian hate speech. A Facebook post published by the Embassy of Russia on March 29 said:

“Dear friends of Russia in Italy!

Every day our embassy receives thousands of messages with sincere words of support and solidarity. We express our deepest gratitude to all Italian citizens who, despite the avalanche of anti-Russian propaganda, fake news and blatant forgery spread by some Western media, express their sincere concern for the fate of our country and the future of relations with Russia. We share your outrage at various attempts to “wipe out” Russia and sow resentment between us: between Russians and Italians.”

And in early April, the Russian Embassy shared the following tweet:

“This morning at the entrance to the embassy we found a bouquet of flowers and a note of solidarity from Italian citizens. We thank you from the bottom of our hearts for this testimony of friendship.”

“A military government on behalf of NATO”

Freelance Italian journalist Giorgio Bianchi, on a Russian talk show he was invited to due to his journalistic work in Donbass, described Rome’s attitude towards Russia as follows:

“In Italy we have a military government on behalf of NATO.”

A few examples of how the Italian mainstream media are inciting anti-Russian sentiments: in one published in La Stampa daily on March 22 opinion article is the headline “If Putin’s death is the only way out”.

Thereon reacted the Ambassador of the Russian Federation in Italy Sergei Razov outraged. He invited some Italian journalists outside the courthouse in Rome on March 25 famous to admit that he had reported the newspaper La Stampa for “inciting crime”.

On March 16, La Stampa made the front page of alleged Russian bombing raids. And how did La Stampa illustrate them? With a well-known earlier photo showing the Ukrainian bombing of Donetsk! The headline in large letters reads: La Carneficina[“TheBloodbath”)ThusthereaderissupposedtobelievethatthemassacrewastheresultofaRussianbombingraid[“DasBlutbad”)SomitsollendieLeserglaubendasMassakerseidasErgebniseinesrussischenBombenangriffsgewesen

Prime Minister Mario Draghi is now “more popular” than ever in Italy due to his belligerent attitude towards Russia and his idea of ​​compulsory vaccination for over-50s:

Mario Draghi at the restaurant in Naples welcomed by an angry crowd: “Vaccinate this cock. Piece of shit. Assassin. Fuck you!” Awesome. pic.twitter.com/YpH8bZ6GFG

In the video, people shout among others: Mandacituofiglio in guerra, assassino! (“Send your son to war, you murderer!”). During his visit to Turin on April 5, Draghi was also greeted by angry people:

The case of Dostoyevsky

Perhaps the most representative symbol of this unprecedented Russophobia in Italy was, at the very beginning, the censorship of the author of Crime and Punishment.

In early March, the University of Milan-Bicocca announced a course on Dostoyevsky to cancel“to avoid tension”.

The decision met with fierce criticism. At the end of March, a mural dedicated to this Russian writer appeared in a secondary school in Naples.

A notable praise this time came directly from the President of the Russian Federation:

“I think many know that and have seen how recently in Naples a street artist painted the portrait of the Russian writer Fyodor Dostoyevsky – who has now been wiped out in the West – on the wall of a building.

This gives us hope that through people’s mutual sympathy, through a culture that connects and unites us all, truth will find its way.”

“How is it that I, as a simple citizen, could do more for peace with a mural than our government? If Putin takes so little as a sign of relaxation, what would he do with a serious peace proposal?”

In his most recent post on April 12, Jorit shared the opinion of millions of Italians about the Ukraine conflict, which has not been represented by political leaders and has not been disseminated by the media:

“This war did not start with the Russian military operation, but 8 years ago and had already caused 14,000 deaths. Didn’t the Donbass children have the same dignity? Weren’t the dead of the Odessa massacre who were burned alive also people?”