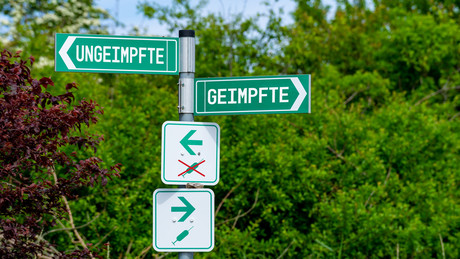 The Corona crisis was also characterized by numerous verbal gaffes by politicians, journalists and doctors against the unvaccinated. An initiative has documented these statements under the hashtag #ichhabemitmachen and is causing debates.

In the past year, some representatives of the state seemed to have been willing to use any means to increase the “willingness” of the population to be vaccinated: it was claimed that the unvaccinated would take German society “hostage”. Penalties or pension cuts were threatened.

Statements by public figures such as politicians, journalists, doctors, officials and scientists are now being collected under the hashtag #ichhabemitmachen, with which the authors spoke out in favor of compulsory vaccination, tougher corona measures or rigorous treatment of the unvaccinated.

The hashtag goes back to an initiative by journalist Burkhard Müller-Ulrich, who hopes that events like this during the Corona period will be processed. Since the beginning of April, users have been posting relevant quotes on Twitter, but social media has been seething since the end of compulsory vaccination. Advocates of compulsory vaccination warn of what they consider to be dire consequences. In autumn it could take revenge that not all people in Germany are vaccinated against Corona, so the tenor.

On the other hand, critics of the corona measures and opponents of compulsory vaccination were pleased with the result of the vote in the Bundestag. Jens Spahn, Karl Lauterbach, Winfried Kretschmann and Boris Palmer, among others, are quoted under the hashtag #ichhabemitmachen. Palmer of the Greens was reminded of some of his proposals:

Even the former Prime Minister of Saarland, Tobias Hans (CDU), who soon no longer governed after the lost election, was reminded of his statement that the unvaccinated were “out of social life”:

The request of a Leopoldina researcher not to treat unvaccinated people medically in an emergency was also documented.

The MDR presenter Sarah Frühauf from the daily topics was also remembered:

Statements by columnist Sarah Bosetti were also documented. This described the unvaccinated as the “appendix” of society and “not essential for the survival of the entire complex in the strict sense”. Since she consciously or unconsciously used the rhetoric of the National Socialists in this comparison, this gave her a shitstorm in December 2021:

Would the division of society really be such a bad thing? It wouldn’t break apart in the middle, but fairly far down on the right. And such an appendix is ​​not essential for the survival of the entire complex in the strict sense.https://t.co/9amdKPQPBx

The Springer newspaper Die Welt also reported on this initiative on Tuesday; here the archived Version. However, the article on the Die Welt website was no longer accessible after just a few hours.

More on the subject – Vaccination falls through: a lot of debate for nothing