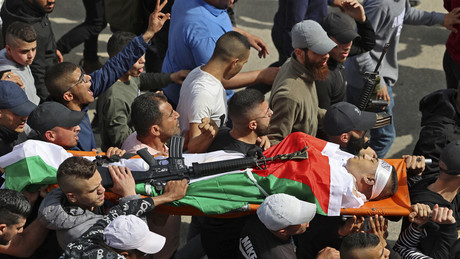 For several days there have been repeated clashes between Israelis and Palestinians around Joseph’s Tomb on the outskirts of Nablus. The Israeli army continues its raids in the West Bank. A Palestinian was shot dead during a raid in Nablus on Wednesday.

A 34-year-old Palestinian man was killed in clashes with Israeli forces in Nablus on Wednesday, the Palestinian Health Ministry said. At least 16 other people were injured. According to the Ministry of Health, Mohammed Assaf was hit in the chest by live ammunition. The Palestinian Red Crescent said in a statement that ten people were injured by live gunshots and six by sponge grenades in the village of Beita and at Joseph’s Tomb.

Tensions in the West Bank have recently escalated after a series of deadly attacks in Israel. In the past few days, Israel has been rocked by several attacks. Since March 22, at least 14 Jewish Israelis have been killed by Arab Israelis and Palestinians from the West Bank. In retaliation, several Palestinians have been killed by Israeli security forces in recent days. The Palestinian city of Jenin, which lives primarily from trade, has meanwhile been targeted with tough economic sanctions.

Palestinian man identified as Mohamad Assaf, 34, has been hit by live fire & killed by Israeli forces during confrontations in Nablus, the Palestinian Health Ministry said. At least 10 others were wounded, amid spike in tensions in the occupied West Bank. pic.twitter.com/3Lozjuyh5d

Palestinians reportedly fired shots at an Israeli force after the Israeli army carried out another raid on Jenin in the northern West Bank on Wednesday. So far, however, no casualties have been reported. Witnesses said the force arrested Musab Hanaisheh, a student leader close to Hamas.

Meanwhile, in a brief statement, the Israeli military confirmed that it was operating in several areas of the West Bank to arrest suspects. Israeli forces have been conducting large-scale raids in the West Bank every day since last Thursday’s attack in Tel Aviv, in which a Palestinian attacker named Raad Hazem fired in a busy Tel Aviv neighborhood, killing three Israelis.

For several days there have been repeated clashes between Israelis and Palestinians around Joseph’s Tomb on the outskirts of Nablus. The Israeli Defense Forces said earlier Monday morning that two Jews were shot and wounded trying to reach the Tomb of Joseph near the West Bank city of Nablus. The circumstances of the shooting were not immediately clear. According to the army, the men passed through an unmanned roadblock at the entrance to Nablus. After attacking them, the men managed to reach an army checkpoint near the shrine, where they received emergency supplies.

According to Jewish belief, the tribal father Joseph, who is also important in the Bible, is said to have been buried in Joseph’s tomb with his sons Ephraim and Manasseh. Israeli military spokesman General Ran Kochav said about 100 Palestinians marched towards the site, rioted and then set fire to the tomb before being pushed back by Palestinian security forces.

Since early 2022, 1,100 West Bank Palestinians have been arrested by Israeli forces, 300 in March alone, Israeli news website Walla reported on Tuesday. That number alone accounts for 50 percent of the total number of Palestinians arrested last year. Israeli Defense Minister Benny Gantz wrote on Friday Twitter, they have already arrested about 200 people, “if necessary” they will also arrest thousands. After the recent attacks in Israel, the government wants to replace the 40-kilometer fence to the West Bank with a wall.

For months, Israel had been warned of another bloody Ramadan after serious unrest and a gun battle between Israel and Hamas in the Gaza Strip last May.