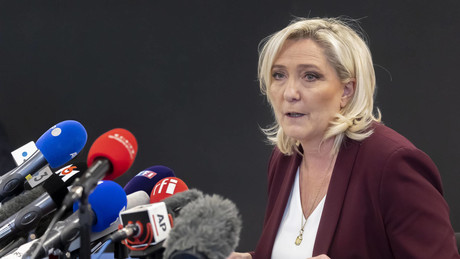 In about two weeks, Marine Le Pen will go into the runoff in the presidential elections in France against incumbent President Emmanuel Macron. Now she has taken a stance on possible sanctions against Russia: Le Pen rejects embargoes in the energy sector.

In an interview on Tuesday, French presidential candidate Marine Le Pen spoke out against the imposition of sanctions on Russia’s energy exports. She believes the French will pay dearly for these restrictions. Le Pen noted that she does not oppose anti-Russian sanctions in other areas of the economy.

“I am against the sanctions affecting energy because I do not want the French to bear the full brunt of the consequences of such a decision aimed at cutting off gas or oil imports. I know what those consequences are.” , the president of the Rassemblement Nacional told radio station France Inter. “I am here to protect the interests of the French people.”

Le Pen’s remark came after one of the radio listeners accused her of being “Putin’s Trojan horse” over her stance on Russia. “I’m nobody’s Trojan horse,” replied the presidential candidate. She argued that she favors other anti-Russian sanctions that do not affect the energy sector.

Since Russia invaded Ukraine in late February, the US and its European allies have responded with unprecedented sanctions targeting Russia’s banking and energy sectors. Washington and London have imposed a ban on Russian oil and gas imports. Since then, energy prices have skyrocketed in these countries, accelerating steadily rising inflation.

The first round of the presidential elections took place in France on Sunday. Around 73 percent of registered voters cast their votes. France’s incumbent President Emmanuel Macron received the most votes, with almost 28 percent of the country supporting him. Marine Le Pen took second place with just over 23 percent of the vote. Third place went to left-wing party leader Jean-Luc Melenchon with almost 22 percent. This qualified Emmanuel Macron and Marine Le Pen for the second round of the presidential elections, which will take place on April 24th.