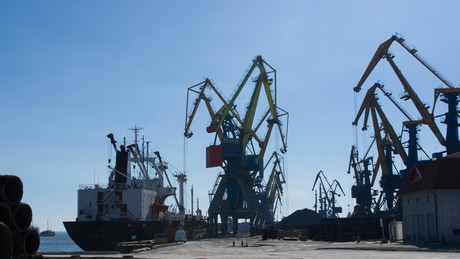 According to a report by the online journal TradeWinds, Russia intercepted a ship that the Ukrainian government had ordered to evacuate leaders of the far-right Azov regiment and foreign mercenaries from Mariupol.

According to a report by the online freight transport journal, TradeWindsRussia claims to have intercepted a ship commissioned by the Ukrainian government to evacuate leaders of the nationalist Azov regiment and foreign mercenaries from Mariupol.

According to the report, Russia is said to have fired on the ship, which is under Turkish control. The ship is said to have been a general cargo ship. Russian Defense Ministry official Major General Igor Konashenkov told reporters the 5,200-ton ship swerved from a shipping convoy in the Sea of ​​Azov on April 8. It was an attempt by the Ukrainian government to evacuate the Ukrainian leadership by sea from the port of Mariupol. The Major General said:

“The Kiev regime continues to try to evacuate the leaders of the nationalist Azov regiment and foreign mercenaries from Mariupol.”

Ukraine wanted to use the ship after previous attempts to evacuate the staff by helicopter failed, Konashenkov further claimed.
He added that the Maltese-flagged vessel was en route from Taganrog Bay to the Kerch Strait along with other vessels. Then, 30 kilometers from Mariupol, it abruptly changed course and tried to break through the Russian naval blockade.

Fire at the stern

The ship is said to have continued its journey and not responded to the Russian military’s request to make contact. Even the artillery warning fire from two border patrol boats was initially unable to deter the ship, Konashenkov continued. In the end, however, the freighter changed course and the crew signaled to the Russian military that they would comply with Russian demands.

There were no injuries in the incident, but the crew had to put out a fire at the stern of the ship that had been started by artillery fire. Konashenkov concluded:

“After the inspection, the Ukrainian cargo ship with the crew will be taken to the port of Yeysk.”

The ship seized is operated by the Turkish shipping company Misha Shipping, which was contacted by the Russian side for more information.