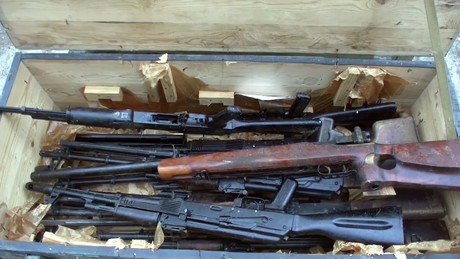 The Russian Defense Ministry has officially confirmed information that over 1,000 Ukrainian servicemen surrendered in Mariupol. These are Marines. Now they face an interrogation.

“In the city of Mariupol, near the Ilyich Metallurgical Plant, 1,026 Ukrainian soldiers of the 36th Marine Brigade voluntarily disarmed and surrendered after a successful move against them by Russian forces and militias of the Donetsk People’s Republic.”

Among the Ukrainian soldiers who surrendered are 162 officers and 47 women soldiers, the Defense Ministry spokesman added. The injured were given medical care, it said:

“The 151 wounded Ukrainian soldiers of the 36th Marine Brigade received first medical aid on the spot and then were taken to Mariupol City Hospital for treatment.”

Earlier, the Headquarters for Territorial Defense of the Donetsk People’s Republic said that more than 1,000 Ukrainian soldiers surrendered to the DPR forces in Mariupol. The headquarters on Wednesday morning verbatim:

“Another 1,009 Ukrainian soldiers in Mariupol have laid down their arms and decided to spare their lives and surrender to a group of DPR troops.”

Russian investigators are carrying out investigative measures with the Ukrainian military prisoners from Mariupol, according to the official spokeswoman for the investigative committee Svetlana Petrenko. She underlined:

“Your testimony could be relevant to the criminal cases the agency is investigating in connection with the events in Donbass and Ukraine.”

Petrenko stressed that the head of the investigative committee, Alexander Bastrykin, “pointed out the need to comply with international laws, which state that prisoners of war must always be treated humanely”.