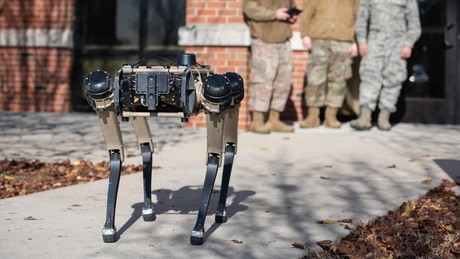 Artificial intelligence is also increasingly finding its way into the military. In the United States, so-called “robot dogs” are now even being used to protect US military properties or even borders. The combat robots will probably soon be seen on patrol around the US base in Ramstein.

Back then, the producers of Star Wars anchored “The Empire Strikes Back” in the minds of moviegoers as a new phenomenon. One of the aspects that captured people’s imagination so much was the battle robots used in the evil empire movies. Decades later, the real walking robots from companies like Boston Dynamics or Ghost Robotics, which are increasingly finding their way into the military, have come full circle.

Instead of huge and almost immobile combat robots, the industry is now developing their designs to mimic the agility, balance and adaptability of an animal’s gait. This should redefine the mobility of autonomous vehicles: And that goes down well with the military. The global defense robotics market, valued at US$13.2 billion in 2020, is expected to reach US$22.4 billion by 2026.

While interest in autonomous combat technology has grown rapidly among all governments since the early 20th century, widespread adoption of such systems has only come about in the last two decades. Today, thanks in particular to the efforts of the US, Israel, Great Britain, France and Russia, various combat robots have evolved from experimental and remote-controlled surveillance machines to autonomous technologies capable of carrying out complex combat operations.

The primary factor behind the increasing popularity of the new military technology is the associated reduced need for human involvement in combat operations as part of military operations. The different types of combat robots are able to enter enemy areas while being cloaked and carry out certain tasks independently. In particular, this should reduce to a minimum the number of fatalities that normally occur in conventional manned operations.

A recently published study shows that the combat systems are now ready for use in military affairs Report the Portland Air National Guard Base, a US Air Force base in the US state of Oregon, according to which the military police there have received a new “robot dog”. According to a report by the US magazine Military, the robot, which can also act autonomously, is currently being tested in surveillance and base security operations. The “Quad-legged Unmanned Ground Vehicle” (Q-UGV) of the Guards unit stationed in Oregon can therefore carry out video surveillance or patrol along a fence, for example, without endangering the air force members of the base.

“We simply tested the robot by programming it different routes and observing how well the system’s GPS worked in our situation here at the base,” Tech Sergeant Jamie Cuniff told US broadcaster KATU TV. “We’re also testing it on a variety of terrain, uphill and downhill and over stairs to see how it interacts with vehicles and the people on the facility,” added Cuniff.

Jointly developed by US companies Ghost Robotics and Immersive Wisdom, the Q-UGV has a variety of cameras and sensors on board and can operate on rough terrain as well as overcome obstacles. The robotic dog can run for up to seven hours on a single charge. The Q-UGV is currently being controlled by an employee of the military police at the US base, but it is likely that the robot will eventually run independently on a pre-programmed route.

“We will also be able to talk to humans through the robot,” Cuniff told KATU TV. “So if we do encounter a person, we can speak to them verbally from elsewhere on the base while simultaneously responding to them. It’s an ability for simultaneous response that we’ve never seen before,” he added .

Tyndall Air Force Base, a US air force base in the US state of Florida, received the robotic dog last year in order to integrate it into the base’s security system for test purposes. “Tyndall is a perfect test base having been dubbed ‘Plant of the Future'”, explained Master Sergeant Krystoffer Miller at the US base’s Public Information Office.

According to the US Air Force, defense robotics has the potential to revolutionize the way security is engineered. Accordingly, the year-long trial of the robotic dog at Tyndall Air Force Base served the purpose of setting new standards for the rest of the US Department of Defense. “I can say that there is definitely a lot of interest in the possibilities of this technology,” Miller said in the release.

“I am confident that other units will see some of the successes at Tyndall Air Force Base and continue to explore the use of unconventional tactics.”

It can therefore be assumed that the combat robots will soon be used on and around the umpteen US properties in Germany. The Q-UGVs in Portland and Tyndall are unarmed, at least according to official reports, but Ghost Robotics had the robot dog on the annual conference of the US Army Association in October 2021 as an armed technology.

Earlier this year, the robot company also partnered with the US Department of Homeland Security. As part of the collaboration, the Q-UGVs are now also to be tested along the US borders. On Twitter, however, the news about the bizarre community of convenience caused strong criticism. Among other things, many Twitter users compared the Q-UVG with the killer dog robot from the US series “Black Mirror”.

Homeland Security is testing robot dogs at the US-Mexico border. They are made by Ghost Robotics, which has equipped some of its robots with guns.DHS claims they could be a “best friend” to Border Patrol agents, whom groups accuse of “grievous” abuses against asylum seekers. pic.twitter.com/TuiCAi5len

The broader debate about the role of autonomous systems in the military and their implications for future jobs in the armed forces is only just beginning to take shape as more inventions reach the field. However, this process is also accompanied by increasing dangers, of which detailed warnings are given. The Future of Life Institute, for example, warned of the dangers of autonomous combat robots as early as 2017. In a video scenario specially created for this purpose, the institute shows the very real danger associated with the military use of combat systems.

In that animation, the fictitious representative of an armaments company proudly presents its new mini drone with face recognition and directional charge, with which individual people can be specifically tracked and eliminated. But then something goes wrong. The flying weapon falls into the wrong hands and cuts a path of death through the world. What sounds like the plot for a sci-fi film was actually presented as a warning at the United Nations Conference on Disarmament in Geneva. The goal behind it: a ban on autonomous weapon systems.

“We want our killer robot video to be or remain a historical reminder of a mistake mankind didn’t make,” the scientists end their appeal. But even on the Institute’s homepage, a reader noted below the video in English that a scenario similar to that shown in the video could not be stopped because humans are inherently evil and all technology is misused: