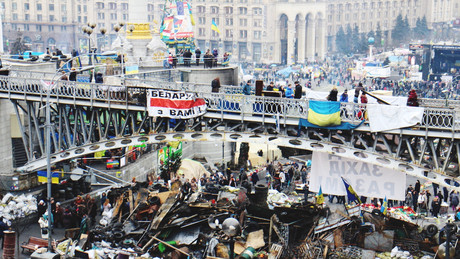 In closed Telegram channels, pro-Ukrainian operators are calling for “lynching” and “executing” “pro-Russian” Germans and Russians in Germany. A terrorist attack on the traditional victory celebration was announced in one of the channels for May 9 in Berlin. So far, the hustle and bustle has gone unpunished.

In a closed Telegram channel, Ukrainian nationalists are planning a terrorist attack on the May 9 celebrations in Treptower Park in Berlin. The operator of the channel, which has 1,900 subscribers, wrote on Tuesday:

“I propose not to spare anyone on May 9th. Stab the (swear word) in public so that the ‘holiday’ becomes a day of mourning. Death to the Russians, this country must be wiped off the face of the earth forever!”

The anonymous operator of the channel wrote this appeal under a screenshot of a chat in which two people in Russian agree to take part in the central victory celebration on May 9 in Berlin’s Treptower Park.

The “Tiere Berlins” channel is used by Ukrainian “patriots” to collect personal data from Russians in Germany and from Germans who sympathize with Russia. Among other things, license plates of cars that took part in motorcades against Russophobia are shown. The texts repeatedly call for the “identified friends of Russia” to be sought out and lynched.

For example, a message posted on April 10 under a posted video showing participants in a motorcade and the license plates of the cars calls for “each of these animals” to be found and visited. Photos and videos “of the execution” are to be sent to the operator.