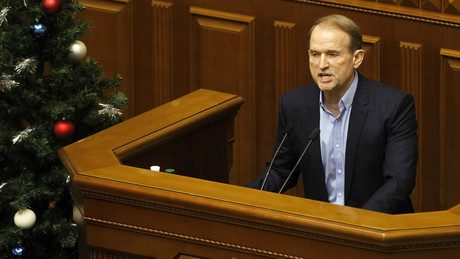 Opposition figures in Ukraine have not only been persecuted and terrorized since the start of the Russian military intervention. On Tuesday, Vladimir Zelensky presented a photo of the arrested and abused opposition politician Viktor Medvedchuk to the public. Now he wants to exchange this Ukrainian for other Ukrainians with Russia.

Vladimir Zelenskiy insisted on announcing this news himself. On Tuesday evening, the Ukrainian leader published on his official social media channels a photo of an old man with disheveled hair, marks of beatings on his face, dressed in an ill-fitting Ukrainian military uniform with handcuffs on.

“Special operation performed thanks to SBU.

Selensky did not name the man – and that was not necessary. Everyone in Ukraine knows this face: This is Viktor Medvedchuk, once the most powerful man in President Kuchma’s apparatus, then pulling the strings in the background and finally one of the figureheads of the country’s left-centrist opposition, disparagingly dubbed “pro-Russian” in the West. He is one of the greatest hate objects of all nationalists and Maidan supporters because he has an open friendship with Russian President Vladimir Putin. Putin is the godfather of Medvedchuk’s daughter, a relationship that is idealized and embellished in Ukrainian culture as an elective affinity, even blood brotherhood.

Photo gallery: About a thousand Ukrainian marines surrender in Mariupol

For Zelensky, the news came just in time to let the media echo of another news item of the evening fade into the background: around 1,000 Ukrainian marines surrendered in the embattled city of Mariupol on Tuesday, leaving almost only fighters of the nationalist Azov party there. Regiment in the last remaining citadel of the city – the steel works of the oligarch Akhmetov – to resist.

A little later, the Ukrainian secret service SBU followed up and published another photo of the prominent prisoner, probably to defy the spokesman for Russian President Peskov, who had previously not ruled out the possibility of the first photo being falsified, as some considered the politician’s head to be too manipulated the uniform that was much too large for him.

The new photo does not make the first impression any better: the traces of bloody wounds on the forehead are now clearly visible.

What happened to Viktor Medvedchuk since the Russian military intervention began remains a mystery for the time being. The politician has been under house arrest since May 14, 2021 and has been since Ban of three TV stations close to the opposition bloc disappeared from public view. All of the businessman’s property was confiscated. Shortly after February 24, 2022, there were reports that he had tried to escape. “Journalists” who were waiting in front of his house noticed and prevented this. These reports soon fell silent, as if someone in power had instructed the reporters not to publish anything more about movements in and around the house.

It was later officially announced that Medvedchuk had escaped house arrest and had gone into hiding. Since the beginning of March there has been no more information about him. Even his wife, a well-known journalist and TV presenter who managed to escape abroad, remained silent.

That leaves room for speculation. The journalist and blogger Anatolij Sharij, living in exile in Spain, presented two hypotheses of the actually conceivable events. According to the first hypothesis, the SBU arrested Medvedchuk in February and spent the past six to seven weeks in a secret service prison, possibly even being tortured, which is indicated by the politician’s poor condition. Now he has been presented to the public with a made-up success story in order to neutralize the military loss in Mariupol in the public eye.

According to Shariy’s second hypothesis, Medvedchuk actually fled abroad, not to Russia but to Hungary. The secret service kidnapped him from there a few days ago and brought him back to Ukraine in a diplomatic vehicle. If this is true, it could have diplomatic consequences in the already poor relations between Ukraine and Hungary.

The SBU already has experience with kidnapping people abroad. Two years ago, a former judge from Moldova was taken to Ukraine in this way.

An official statement on how, where and when Viktor Medvedchuk got into the hands of the secret service is still awaited.

In return, Zelensky has now announced what he intends to do with Medvedchuk: he wants to propose to Putin that he be exchanged for captured Ukrainian soldiers. Previously, there had been speculation that an exchange for a NATO general allegedly staying in the catacombs of the steelworks in Mariupol could be sought.

In the first half of March numerous prominent members of the opposition and intellectuals disappeared from Ukraine under unclear circumstances. Observers speak of at least 600 missing people in Kyiv alone. RT DE has twice so far reported about it. With the exception of Miroslawa Berdnik, who appears to be at large (again), the fate of those named in earlier reports is still unknown. Observers are expecting the very worst. Cynical as it sounds, the emergence of Viktor Medvedchuk at least gives some hope that some might still be alive.

More on the subject – Terror in Ukraine: More journalists and intellectuals disappear without a trace