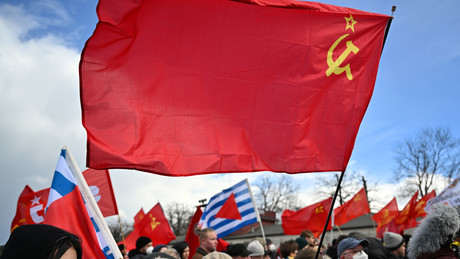 “Our cause is just – victory must be ours!” Not only did Molotov’s speech end like this on the day the Nazis attacked the Soviet Union, this sentence is also part of the Buchenwald oath. An oath which, days after the prisoners themselves had defeated their guards, all surviving prisoners of all nations swore at the roll call ground; an oath whose text is known worldwide.

“We therefore swear before the whole world on this roll call square, on this site of fascist horror: We will only stop fighting when the last guilty party stands before the judges of the peoples! The destruction of Nazism with its roots is our slogan. The reconstruction a new world of peace and freedom is our goal.”

When you look at how the memorial has developed since the end of the GDR, and in particular the design of the last commemoration this week, it is difficult to say whether anger or rage predominates. In any case, what happened there has nothing to do with the oath that was once sworn in Buchenwald, and which for decades set the standard in Germany for what anti-fascism is and what its task is.

It was already known in advance that the representatives of the governments of Russia and Belarus were disinvited. The foundation that runs the memorial and controls the event, justified the fact that “because of the Russian war of aggression in Ukraine” not only was the Ukrainian Vice President of the International Committee, Boris Romanchenko, killed by Russian shelling in Kharkov, but that the existence of hundreds of other survivors were also threatened.

Now it is imprudent, at least from a distance, to assume that it was Russian shelling, because, as is well known, in every war at least two sides shoot, and the accounts of Mariupol residents give a different picture of the shelling of residential buildings. In any case, the Ukrainian media have extensively exploited Romanchenko’s death, and the foundation has no problem accepting its interpretation. And sees himself as completely on the safe side: “So our actions are not explicitly directed against Russia and Belarus and certainly not against the memory of the concentration camp victims from these countries, but only against the two governments (or their official representatives ), who are currently committing or condoning the most serious war crimes and who are also taking massive action against the opposition in their own country.”

It should be added that such behavior, disinviting government officials, did not occur even during the Cold War. And a question of how the commemoration of the horrors of the concentration camps should not be mixed up with current political issues. Well, it’s a foundation of the state of Thuringia, which doesn’t seem to have any scruples in this regard. For this, Mr. Melnyk should once again be the representative of Ukraine, who, that reported Surprisingly, the Frankfurter Rundschau also likes to support the Nazis of Azov. And Ukraine’s most serious war crimes and its crackdown on the opposition, which consisted directly of tanks and bombers, were not sufficient grounds to break with diplomatic conventions.

As hypocritical as this invitation was, in view of the long history of the war in Ukraine – which, by the way, is also just an anniversary, because on April 13, 2014 in Kyiv the order for the so-called “anti-terrorist action” was given, which in reality was the The opening of a civil war was – like the German participation in it – even worse is a small, symbolic act that took place around the commemoration event.

The flags of all countries from which the prisoners of Buchenwald came are hoisted on the premises. Including the Belarusian one. Before the commemoration event, and this must have been done on behalf of the foundation, the Belarusian flag was removed and replaced with the flag used at last year’s demonstrations.

However, this flag was also the flag of Belarusian Nazi collaborators. So the Belarusian victims of Buchenwald were commemorated under the banner of the auxiliary troops of their murderers. This is not just symbolic cynicism. If you know the historical connections around this flag, it is much more.

It first appeared in 1918 in the Belarusian Democratic Republic. Like its sibling founding in the Ukraine, this was an entity created by the German military on territory occupied by it, which accordingly disappeared again when the young Soviet state succeeded in taking it back from the occupying power. It only reappeared under the next German occupation.

The creator of the Nazis’ foreign policy strategy towards the East was Alfred Rosenberg, the Nazis’ chief ideologue, who was responsible, among other things, for “racial theory”. The Baltic German developed to perfection the concept already begun by the Wilhelmine army command of splitting off as many small peoples as possible from Russia. He headed the office that was responsible for the political supervision of all auxiliary troops, Ukrainians as well as Belarusians, Latvians, Lithuanians, Estonians and Crimean Tatars, and that was responsible for the administration of the occupied territories (i.e. their plundering). Under the aegis of the Rosenberg Ministry, a “Belarusian Central Council” was founded in December 1943, which revived this flag. The main function of this body was to find volunteers to fight the advancing Red Army.

These Belarusian auxiliary troops, which were called “Belarusian Home Guard”, were particularly active together with the SS in “fighting partisans”; especially in Belarus a term behind which above all massacres of the civilian population hid. They cooperated with the notorious SS unit Dirlewanger, among others; a force recruited primarily from convicted criminals and particularly brutal even on the SS scale. Incidentally, the skull of the Dirlewanger troops is particularly popular with Ukrainian Nazis today and is used e.g. B. used by the “misanthropic division” of Azov.

These collaborators behaved like the Ukrainians in defeat and ultimately fled to Germany, where they played government-in-exile with West German funding and, like their Ukrainian counterpart, became members of the Anti-Bolshevik Bloc of Nations, a collection of former Nazi collaborators controlled by the CIA for decades was cared for.

This is related to the flag that was hoisted instead of Belarus’s for the commemoration in Buchenwald. It’s one thing for the media to pretend that this story doesn’t exist, because you want to make the actors in a color revolution appear as sympathetic as possible. It’s disgusting and distorts perception, but it’s classic western geopolitics. But hoisting such a flag in a place like Buchenwald is a completely different act. A fascist one.

You have to know how the Nazis used to deal with history, including recent history. This can be perfectly explained using the example of Dachau; but there are far more such examples that relate not only to places but also to dates. Dachau was chosen as the site of the first concentration camp for precisely one reason – it was there that, during the Munich Soviet Republic, white troops had suffered a severe defeat by the Bavarian Red Army. That’s why in the 1920s there was the sentence: “We’ll see each other again in Dachau”. He referred to this victory. With the erection of the concentration camp at this location, the memory of it was not only supposed to be overwritten, but also to become almost inexpressible. And it succeeded; no one thinks of a victory for Bavarian revolutionaries when they hear the word Dachau.

Bringing this flag to the Buchenwald compound as a symbol of the very enemy that the prisoners had sworn to destroy along with their roots is a typical example of fascist historical politics. Just a small version of what has been happening in Ukraine for years, where monuments are being rededicated and streets are being named after Nazi collaborators. They do it because their great role models did it, as the example of Dachau shows, and now this approach is returning to the country from which it originated, in the form of a fascist flag from Belarus at the Buchenwald commemoration. And it may well be that the discharge, which itself was already disconcerting, took place with the consent of the former inmates; but it is hard to imagine that there would have been approval for the hoisting of this flag. You have to be happy that the Soviet flag was still allowed there.

There have long been arguments about the monuments, especially the anti-fascist ones, in Germany. In the 1980s, the Bavarian state government tried to close the memorial in Dachau because that was long enough ago. The memorial in Buchenwald was falsified when the foundation was established because the federal state of Thuringia felt it necessary to commemorate the inmates of the Soviet camp there, even though the majority of them were Nazi criminals; when the Federal Republic, in which these gentlemen had mostly not been prosecuted, took over the GDR, one could suddenly claim that they had been persecuted there and not, as would be the case in reality, held accountable. Since then, in addition to the large memorial for the victims, there has been a smaller one for the perpetrators.

But the use of this flag in Buchenwald is a signal that the rewriting of history has entered a new phase. While since 1989 the main focus has been on wiping out everything reminiscent of the GDR, the space is now being occupied offensively. And what it is filled with is also recognizable. Step by step. Word by word. Based on a script written by Alfred Rosenberg.