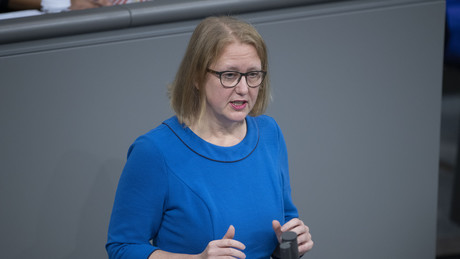 The Green finance politician Lisa Paus will succeed Anne Spiegel in the family ministry. Paus explained the introduction of basic child security as one of her most important tasks. The 53-year-old is assigned to the left wing of the party.

The Green finance politician Lisa Paus is to become the new family minister. Paus is to succeed Anne Spiegel, who announced her resignation on Monday. Paus is attributed to the left wing of the party. She comes from the Berlin state association and has been a member of the Bundestag since 2009. The 53-year-old graduate economist from North Rhine-Westphalia has years of experience in financial and economic policy, is regarded as one of the leading minds behind the green concept of so-called basic child security and, surprisingly, also as a critic of Olaf Scholz (SPD) in the Cum-Ex Scandal.

The Hamburg Senate under the leadership of #OlafScholz was closer to #CumEx– Tax scandal as admitted. The past of the chancellor candidate is neither statesmanlike nor golden, writes the @wiwoThis article sums it up. 👇🏻https://t.co/Ww2bXMULHt

As she said at her presentation in Berlin on Thursday, the introduction of basic child security is one of the most important tasks of her forthcoming term of office.

“Child poverty was always a huge thorn in my side,” said Paus.

You have a “huge respect” for the task of taking over the ministry. But she is looking forward to it, wants to “tackle” and give new impetus “with all the commitment that I can bring to the families in this country,” said the Green politician. In addition to basic child security, Paus also described measures for more equality in the country, the fight against violence and improving the situation of single parents as other important tasks.

Spiegel is still in office until Federal President Frank-Walter Steinmeier handed her the certificate of dismissal and Paus is sworn in and appointed.

The introduction of basic child security is one of the central projects of the traffic light coalition. The aim is to pool the state’s previous financial support for children and replace it with a basic amount for all children from birth. Due to the complexity of the topic, which involves child benefit, Hartz IV, tax issues and much more, a working group was initially formed with experts from the Ministry for Family Affairs and the Federal Ministries for Finance, Justice, Labour, Education and Housing. You should work out the details.

The previous family minister, Spiegel, announced her resignation after it became known that she had gone on a four-week family vacation shortly after the flood disaster last summer. As Rhineland-Palatinate Environment Minister, she shared responsibility for crisis management at the time.

More on the subject – The Ahr valley flood and Ms. Spiegel’s resignation – there are still completely different calculations to be made