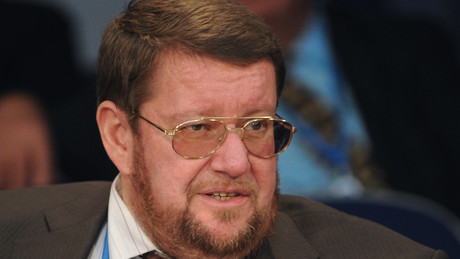 Yevgeny Satanovsky, strategic thinker and adviser to the Russian Defense Ministry, took the invitation from Kyiv to remind Steinmeier of Germany’s role in the region, the danger of a new world war and Putin’s role.

the diplomatic slap for Federal President Frank-Walter Steinmeier, who had missed him the official Kyiv with the declaration that they did not want him to take part in the visit of the four Baltic and Eastern European heads of state, did not go uncommented in Russia either.

The sharp-tongued political and Middle East expert Yevgeny Satanovsky wondered on his Telegram channel especially about the reasons that led Ukrainian President Vladimir Zelensky to commit this affront. Selensky had accused Steinmeier of too close contacts with Russia and a special commitment to the Nord Stream 2 gas pipeline. Satanowski expresses doubts about this:

“The German Federal President (…) made some statements that cast strong doubts on his sympathies for our country and its leadership. It already spoke of the impossibility of normalizing relations between Germany and Russia under Putin and of the necessity , to investigate ‘Russia’s crimes in Ukraine’ (?!), and much more.”

“invaded Ukraine for the third time in the last 100 years, supplying armored vehicles and other weapons and equipment and opening access to the Ukrainian security forces to German ‘volunteers’ or simply neo-Nazis who wanted to shoot at Russians for amusement”.

Satanowski argues that even Steinmeier cannot overlook the parallels to the two world wars, when Germany and the Germans were in Ukraine and fought there in alliance with local nationalists against Russia.

“The first time against the Russian Empire for the Kaiser, the second time against the Soviet Union for the Führer. (…) It is known that God loves the Trinity, but not to this extent! He (Steinmeier) became through that inspired by the outcome of the Treaty of Brest?”

The German plan to try to colonize Ukraine for the third time and this time successfully will not work out:

“Putin is not Lenin, and the Russian Federation in April 2022 is very different from Soviet Russia in March 1918. And no German general staff can provoke a revolution here today. Once was enough for us. (…) No, it’s clear , that the Germans were also at war with the British and the Americans at the time, and now they are all in complete agreement about Moscow.(…) However, one has to bear in mind that a third world war for Europe, especially for Great Britain and Germany , can end faster than they can begin.The results of a third world war that is evolving from the current proxy war of a Ukraine pumped full of Western weapons and fueled by NATO mercenaries and military against Russia into a direct exchange of blows between Moscow and the Western world , is unlikely to please anyone there.”

According to the political and security expert, the guarantor that this has not yet happened and that a catastrophe scenario has been avoided so far is “the same Putin under whom Steinmeier sees no possibility of normalizing relations with Russia.” Any other Russian politician with a chance of holding the highest office in the country would have had far less patience with the West and would have acted more radically long ago.

Satanowski believes it is unlikely that a successor to Putin will be able to normalize relations between Russia and the West. There is no one in Russia’s elite who is more positive about the West, Europe in general and Germany in particular, than Putin. “Especially after everything that the leaders of the western world have screwed up in the post-Soviet space in the last ten years,” the expert emphasizes, they cannot expect a positive attitude towards themselves and their countries. The West doesn’t understand that and is therefore continuing the “idiotic and doomed attempts” to overthrow Putin, which only strengthens his position in the country.

Born in 1959, Satanowski is one of Russia’s leading experts on geopolitics and international security, influencing decision-making processes at the highest levels. About two years ago, he was one of the first to criticize the Kremlin’s course, which was then only oriented towards a diplomatic solution. According to observers, this provided one of the impetus for the change of course.

By his own admission, Satanowski was involved with Islamist extremism for the KGB from 1982. Since 1993 he has headed the Middle East Institute, one of the leading think tanks in Russia. Satanowski was a co-founder and for many years President of the Russian Jewish Committee. Since 2019 he has been a member of an advisory board to the Ministry of Defence.

More on the subject – Ukraine Conflict: The Death of Europe and the Birth of a New Order