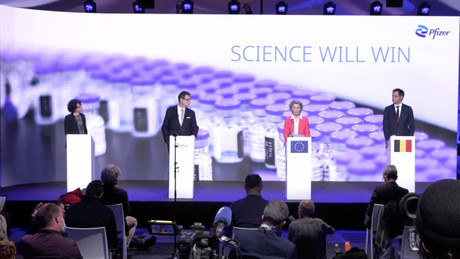 The outstanding economic winning team in the global corona crisis is Pfizer/BioNTech, a US-German company cooperation since 2020. Sales and profit batches in the pharmaceutical industry are already reaching historic dimensions. a worldarticle added to this topic:

The daily News specified regarding the German crisis profiteer BioNTech from Mainz:

These figures are presented without problems, i.e. made available. More precise and clarifying details of contracts concluded between pharmaceutical companies and governments would be of similar interest. However, they continue to be refused by the corporations, announced with hesitation or only made available partially redacted after appropriate pressure. In the current world article, there are further revealing insights into the “gagging contracts”. This is what the post says:

“In doing so, they imposed their will on governments and pursued a strategy that enabled them to maximize profits and limit their risks. Fear was their best ally.”

It has been confirmed once again: The confidentiality of contract content – including far-reaching concessions to the manufacturer in the event of failures or side effects – was demanded and coerced by the politically responsible parties as an essential basic requirement on the part of the corporations. The dependency on the required vaccine batches was misused as a means of pressure for any demands. Esperanza Martínez, MP and former Minister of Health of Paraguay, explains the difficult situation at the time during the contract negotiations as follows:

The problem in April 2021 for the small landlocked country in South America was that less than one percent of the population was vaccinated and there were no contracts with pharmaceutical companies. According to the Welt article, the reason for the status quo in the corona crisis at that time was:

“The companies made demands that Paraguay’s legislation did not allow to be met, such as keeping the contents of the contract confidential and making concessions to the manufacturers in the event of delivery delays, failures or side effects.”

Out of concern for the population, based on the global information policy of the time, a change in the law was then initiated. With the result:

“Even politicians who were against the measure – like Martínez – agreed. And in May 2021 the deal with Pfizer for a million doses of vaccine was made.”

Zain Rizvi is a pharma expert for Public Citizen, a New York-based civic association that was given access to and analyzed nine agreements, or pharma contracts. In October 2021, Rizvi released one contribution entitled: “Pfizer’s Power”. The report says:

“In February ’21, a landmark report by the Bureau of Investigative Journalism accused Pfizer of ‘intimidating’ governments in the COVID vaccine negotiations. A government official remarked at the time, ‘In five years, when these confidentiality agreements are over, you’ll know what’s going on at really happened in those negotiations.’

The unredacted contracts have clearly shown how drug companies gained power through tough negotiations “to silence governments, curb supply, shift risk and maximize profits in the worst public health crisis in a century.”

Details emerged from Brazil that Pfizer insisted on contract terms in the negotiations that were “unfair and abusive”. The Brazilian government pointed to five conditions it considered “problematic, ranging from a waiver of state immunity over public assets to a lack of penalties for Pfizer in case of delays in shipments.” In addition, Brazil will be prohibited from “accepting vaccine donations from Pfizer from other countries or buying Pfizer vaccines from other manufacturers.”

And the British government was also coerced, as the documents show. Should the UK not be able to settle a contractual dispute with the manufacturer Pfizer, only a “secret panel of three private arbitrators – not a British court – will be authorized according to the contract to make the final decision.” The draft treaties for Albania, Brazil, Chile, Colombia, the Dominican Republic and Peru also require their respective governments “to go further and conduct contractual disputes in accordance with the rules of the International Chamber of Commerce (ICC) Arbitration Rules, applying New York law”. to let.

In the Albanian Treaty (Clause 10.4, page 31), the US company Pfizer secured the clause that the content of the contract must be kept strictly secret for up to ten years after termination of the contract. In the contract with Israel there is a secrecy even for a period of 30 years agreed been. The arrogance of the pharmaceutical company’s power is illustrated by the example when the State of Israel let Pfizer’s billing deadline pass. Pfizer then referred to Israel as “banana republic” and briefly stopped the vaccine deliveries. On the subject of the still unknown price agreements, the world article says:

“Details about the prices are leaking out more and more. From Bulgaria, for example, it became known that the EU will pay 19.50 euros for each dose of the Pfizer vaccine this year – an increase of four euros per unit. Also Moderna, which has its first vaccines sold in Europe at a price of US$19, increasing this amount to as much as US$25.50 in later contracts.

Israel even paid $30 per dose. These quite high amounts are offset by the price paid by Albania – the country agreed a price of twelve euros per dose with Pfizer. In return, it accepted stricter conditions.”

The power of the pharmaceutical giants deliberately misused the uncertainty and concern of unsettled politicians, which in turn had to react to the fears of the population. In the end, “resisting”, i.e. critical countries, had no choice but to give in to the massive pressure from the manufacturers. That’s what the article says.

“The system for coordinating vaccine purchases that worked for decades in Latin America via the so-called ‘fondo rotatorio’ broke apart with COVID. For four decades, countries had joined forces to negotiate better prices and terms for purchases.”

“It’s very angry, because the dictatorship of technology and science has us in its hands. Today it can be COVID, tomorrow it might be something else.”