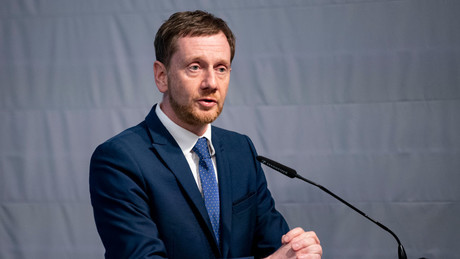 In an interview for the Rheinische Post, the Saxon Prime Minister Michael Kretschmer (CDU) spoke out strictly against the delivery of heavy weapons. The politician argued that the red line behind which Germany would become a war party should not be crossed.

The Prime Minister of the Free State of Saxony Michael Kretschmer (CDU) has spoken out strictly against the delivery of heavy weapons to Ukraine. in one interview published on Thursday for the newspaper Rheinische Post he said:

“We would cross a line if we deliver tanks or planes or even set up a no-fly zone.”

Germany is doing an enormous amount, added Kretschmer, but must not become a party to the war. The politician also criticized the hasty abandonment of fundamental foreign and security policy principles by the “traffic light” coalition in Berlin:

“It is with great concern that I see the currently stable guard rails of German foreign and security policy being torn down very quickly. Germany has so far refused to supply weapons to war zones, and with good reason,” said Kretschmer.

The Prime Minister of Saxony sees a way out in forced diplomatic efforts. You have to work with the US and European partners to increase the pressure and end the conflict at the negotiating table.

In the interview, the Saxon Prime Minister also spoke out against an embargo on deliveries of Russian oil and natural gas.

More on the subject – Kretschmer on the SWIFT exclusion: “Also has dramatic effects on ourselves”