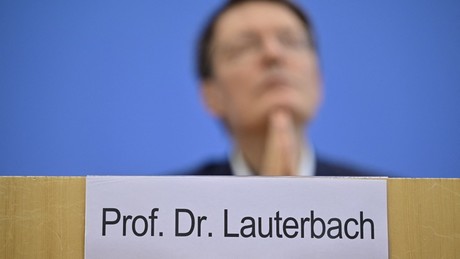 A Telegram chat group is said to have planned a blackout and “civil war-like conditions” with attacks, and also a kidnapping of Health Minister Karl Lauterbach. Investigators suspect that there are so-called Reich citizens and opponents of the Corona policy in the group.

Members of a chat group in the short message service Telegram are said to have planned explosive attacks and kidnappings in Germany – for example by Federal Health Minister Karl Lauterbach (SPD). Now investigators under the leadership of the General Public Prosecutor’s Office in Koblenz and the State Criminal Police Office (LKA) of Rhineland-Palatinate are taking action against them in a number of federal states, as they reported on Thursday in Mainz.

According to the information, around twelve people from the chat group are identified. They are said to have planned to destroy power supply facilities in order to trigger a nationwide power outage. Power lines and substations are said to have been targeted. “According to the accused, this should cause civil war-like conditions and ultimately overthrow the democratic system in Germany,” said a statement from the public prosecutor’s office and the LKA. The investigations against the group have been ongoing since October 2021.

In addition, the “kidnapping of well-known public figures” is said to have been part of the group’s plans. The investigators named Minister of Health Karl Lauterbach as a target. The SPD politician had repeatedly reported threats against him. At the beginning of March, after the Austrian Minister of Health Wolfgang Mückstein (Greens) had resigned due to constant hostilities, among other things, the Federal Minister of Health wrote on Twitter:

“It’s a shame he was forced out of office by threats. I’m under 24-hour surveillance too and I know the strain.”

“For days there have been calls online again to kill me. It’s absolutely unacceptable that something like this doesn’t have to be deleted immediately.”

As part of the investigation into the chat group, 20 properties in Rhineland-Palatinate, Baden-Württemberg, Brandenburg, Bavaria, Lower Saxony, North Rhine-Westphalia, Saxony, Schleswig-Holstein and Thuringia were searched on Wednesday. There were most actions with five in Rhineland-Palatinate, there were three each in Bavaria and Lower Saxony. Around 270 officers, including special units, were deployed. Weapons, ammunition, cash, gold bars and silver coins were among the items seized. Four suspects have been arrested and arrest warrants have been requested against them.

Germans aged 55, 54, 50, 42 and 41 are accused. They are accused of preparing a serious act of violence that is dangerous to the state and of violating the Weapons and War Weapons Control Act. The people can be assigned to the Corona protest scene and the Reich Citizens’ Movement. This combination is what is special about this group, said LKA President Johannes Kunz. The main suspects are said to be a 55-year-old from Neustadt/Weinstrasse in Rhineland-Palatinate and a man from Brandenburg. The 55-year-old was reportedly arrested while preparing to hand over a weapon.

More on the subject – Why are human rights activists, zero-COVID faction and politicians silent about the events in Shanghai?