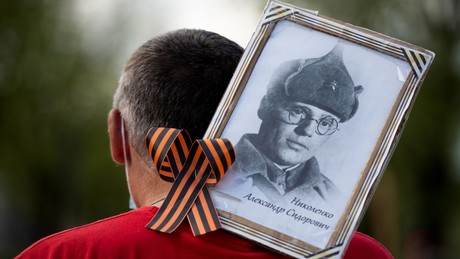 The annual commemorative march “Immortal Regiment” will take place again in the traditional format this year on May 9, reports the Russian agency RIA Novosti. For the past two years, the event has been held in online format due to the pandemic.

After two years of online format, the annual “Immortal Regiment” memorial march in Russia is allowed to take to the streets again: people parade through the city with photos of their relatives who fought in World War II. The aim of the movement is to keep the war veterans alive even after their death.

The idea emerged in 2012 as a “grassroots initiative” in Tomsk. Since then, the commemorative march has been held annually on Victory Day in Russia and abroad. The organizers emphasized that the event could also take place in Ukraine this year, provided that the population so wishes and the safety of all participants is guaranteed.

Kremlin spokesman Dmitry Peskov said in early March that this year’s military parade will take place as usual on May 9 in Red Square. It is still unclear whether the military of the People’s Republics of Donetsk and Lugansk will also take part in the victory parade.

More on the subject – “The decisive and final…”: Russia releases archival documents on Battle of Berlin