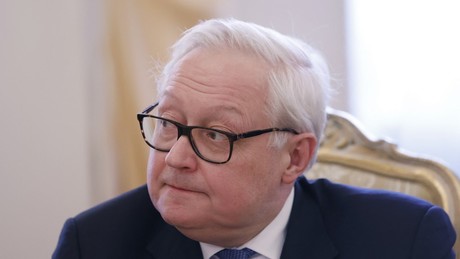 Russian Deputy Foreign Minister Sergei Ryabkov reiterated in an interview published on Wednesday that convoys delivering arms from NATO countries to Ukraine are considered legitimate targets for the Russian military. This applies as soon as they reach the area controlled by Kyiv.

Russia will consider convoys delivering arms from NATO countries to Ukraine as legitimate targets for its military once they reach Kyiv-controlled territory, Deputy Foreign Minister Sergei Ryabkov warned in an interview published on Wednesday.

Regular contact with the US is for Russia given Washington’s “blatant support for the militaristic intentions of the Kiev regime [und] the delivery of modern weapons” by NATO members to the country is impossible, the diplomat explained. One of Moscow’s concerns is now to make it absolutely clear to the USA and its allies that Russia will react with harsh means to attempts to block the Russian military in Ukraine Ryabkov said:

Moscow has maintained this position since the first days of the war in Ukraine. This week, the Russian Defense Ministry reported the destruction of four S-300 air defense system battery launchers delivered to Ukraine by an unnamed European country.

The weapons in question have been suspected to have come from Slovakia, which last week announced it would donate an S-300 battery to Ukraine. Slovakian Prime Minister Eduard Heger described the Russian claim as “propaganda” and referred to Kyiv’s denial of the report.

In an interview with the TASS news agency, Ryabkov said that Washington is de facto refusing to give clear answers about the Pentagon-funded bio-laboratories in Ukraine. Moscow and China expressed fears that the labs would be used for bioweapons research, a claim promptly denied by US officials. However, the absence of an adequate response to legitimate questions “confirms that our concerns are well founded,” the Russian diplomat said.

Ryabkov stated that all talks between Russia and the US on strategic stability and nuclear deterrence have been frozen. The New START disarmament agreement — the last nuclear arms reduction treaty binding the two nations since the Cold War — will remain in effect until February 2026, he said.

The senior Russian diplomat added that US attempts to harm Russia through economic sanctions had failed, contrary to “expectation that the Russians would give up what the West was convinced of.” The restrictions also hurt Western nations and companies, he stressed. And while they could slow down Russia’s development, they wouldn’t be able to stop it in the long run, Ryabkov assured, adding that Washington, DC was irritated that Russia was “in quiet concentration” on stabilizing its economy and ensuring its sustainable functioning.