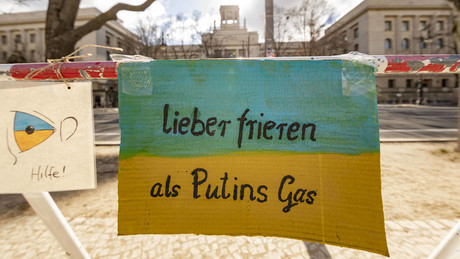 The corona situation, inflation that will soon run rampant, the war in Ukraine and the question of whether Germany can do without Russian natural gas and oil have placed the issue of energy supply in the spotlight in a way that it hasn’t for a long time: the majority wants it according to a survey, however, not “freezing for freedom”.

The Germans worry about inflation and the energy supply. In March of this year, they responded to a representative survey conducted by the Allensbach Institute for Demoscopy according to When asked by the FAZ what is currently causing them great concern, 71 percent said it was inflation. 62 percent stated that they were primarily concerned about the energy supply. Furthermore, as many as 86 percent stated that they feared that there would be difficulties with the energy supply in the next few years. For comparison: In 2019, the value was still a manageable 26 percent.

Less the mainstream media, but the result of everyday dealings with the crisis fuel these high values ​​- and thus distinguish them from other crises. Many Germans feel the inflation very specifically in many products and services and would also develop changes in behavior as a result, as the study commissioned by the FAZ shows. 68 percent stated that they would charge the prices for heating very heavily or heavily.

The energy source is less important. 68 percent of users of district heating stated that the heating costs would burden them very heavily or heavily, and 62 percent of those who heated with wood or wood pellets. The additional burden caused by the rise in petrol prices is felt to be almost as great. 61 percent of drivers, or just over half of all those surveyed, stated that the high prices for petrol and diesel weighed heavily or heavily on them.

However, a kind of habituation seems to have set in here. As early as September 2021, when the price of petrol was around 50 cents and that of diesel around 60 cents below the current level, 47 percent and thus only slightly fewer respondents than in the current survey complained that fuel prices were very high or high would be affected.

A change in consumer behavior can already be observed, especially when shopping: 54 percent of those surveyed stated that they look at the price more than they used to when shopping because of the recent rise in prices. 47 percent are reluctant to heat their homes and set the temperature at home lower than they would have done in the past.

45 percent tried to spend less in general and more than a third, namely 37 percent, say they drive less. Only 17 percent of those surveyed said that they had not changed their consumer behavior at all despite the high inflation.

In late summer 2021, only 54 percent considered the goal of lowering energy prices so that electricity, petrol and heating costs as little as possible to be particularly important; now it is 64 percent. Over the same period, support for the demand to expand renewable energies as quickly as possible rose from 65 to 77 percent. At the same time, the number of those who called for Germany to give up coal as an energy source as quickly as possible also fell from 34 to 23 percent.

A supposed “climate justice” and “sustainability” is no longer so important. In the current survey, only 21 percent of those surveyed agreed that prices should be higher for those types of energy that make more demands on the environment. In 2021 it was 26 percent, in 2014, when the question was asked for the first time, more than one in three, namely 39 percent. A current discussion about the consequences of a possible oil and gas embargo against Russia has contributed to this. Another question was:

“Germany has set itself the goal of generating its entire electricity supply from renewable energies by 2050 at the latest. Do you think this can be achieved, or do you have any doubts?”

Although more than three-quarters of Germans approve of the rapid expansion of renewable energies, only 26 percent answered this question that they believed it would be possible to completely switch to renewable energies by 2050. A clear majority of 54 percent had clear doubts as to whether this seemed realistic.

Now attitudes towards nuclear energy have changed too – although the matter has been off the table for most since the decision to phase out in 2011. In March 2022, the proportion of those who said that nuclear power plants should be kept online beyond the end of the year had risen to 57 percent from just 35 percent in the previous month. Only a quarter still supported the punctual shutdown in the next few years. The FAZ therefore sums it up:

“Obviously, a majority of Germans cannot understand why, in the current crisis situation, power plants that function independently of Russian oil and gas should not be used.”

No energy embargo against Russia

The majority in the country is also skeptical about a complete energy embargo on Russia. In a question two arguments were put against each other. The first read: “I think Germany should stop buying oil and gas from Russia immediately. It is unacceptable for Germany to continue purchasing these raw materials from Russia and thus co-finance the Russian state and indirectly also the war against Ukraine.”

Only 30 percent then chose the first position, while 57 percent chose the second position. Concerns about the stability of the energy supply and probably not least the daily experience that the war in Ukraine is already having a significant impact on their own wallets encourages the majority to continue importing oil and gas from Russia.

This can also be seen in the context of a statement by former Federal President Joachim Gauck. In March, he put forward the thesis on a television talk show that citizens in the current crisis could be expected to forego their own prosperity if this serves the goal of containing the war in Ukraine. He summed up the argument with the following sentence:

“We can sometimes freeze for freedom.”

But the Germans see it very differently. Less than a quarter (24 percent) of respondents agreed with this statement, while 59 percent disagreed.

More on the subject – Crisis winners: Chinese exports and gold prices are increasing