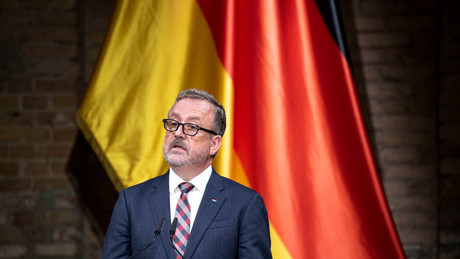 From the point of view of the Federal Government and its outgoing Commissioner for Aussiedler and National Minorities, Bernd Fabritius, there is no particular problem with anti-Russian hostility in Germany. Reports about this are “disinformation, lies and propaganda,” said the Interior Ministry spokesman at the federal press conference.

The Federal Government Commissioner for Aussiedler and national minorities Bernd Fabritius (CSU) sees no danger in Germany for migrants from the former Soviet Union. He also sees no support for the Russian actions in the Ukraine among the Russian-Germans. According to Fabritius, claims to the contrary came from a few “lateral thinkers loyal to the Kremlin” among Russian speakers and had no connection to reality. He said so in an article published on Monday interview with the world.

“The vast majority of Russian-Germans reject this inhuman war, which they call a civil war,”

says Fabritius in this interview. Rather, the appearance of a protest is organized by a small group.

“There are individual actors on the Russian side who are working specifically on the narrative that since the outbreak of the war, Russians and Germans from Russia have no longer been safe in Germany. They include, for example, the German-Russian Brotherhood, an offshoot of Vladimir Putin’s motorcycle club.”

RT DE is not aware that Vladimir Putin owns a motorcycle club.

Fabritius was pleased that RT DE was “switched off”. The world quotes him as saying:

“RT Deutsch has been shut down, and rightly so. But there are people who have fallen victim to these disinformation campaigns, especially if they are older and have mostly obtained their information from Russian-language media.”

The fact that RT DE is not a Russian-language medium seems to have escaped the lawyer’s attention.

He was not able to detect any anti-Russian sentiment, said the officer. The only thing that worries him is the fact that Germans from Russia are confused with Russians.

“I haven’t noticed any generalized anti-Russian hostility in recent years. Unfortunately, at the moment it’s becoming clear that many people know too little about Germans from the former Soviet Union.”

Fabritius thinks that the Germans from Russia would suffer because “they were the Germans in their old homeland and the Russians are here”.

The Romanian-born politician, association official and lawyer Fabritius has been criticized by various clubs and organizations of Germans from Russia, among others. He is accused of not looking after the interests of late resettlers and Russian migrants and of not having any relation to their everyday reality.

However, Die Welt presents this differently in the foreword to the interview:

“Fabritius has good connections to Germans from Russia. He is the federal government’s commissioner for issues relating to resettlers and national minorities and is chairman of the Association of Expellees, which also represents late resettler associations. The lawyer was born in Transylvania and immigrated to Germany with his parents in 1984.”

The Association of Expellees, chaired by Bernd Fabritius, is considered to be right-wing conservative, revanchist, nationalist and close to the extreme right. It unites 1.3 million members in 20 so-called “country teams”. A “country team of Germans from Russia” is also included. However, this does not provide any information on the number of members. According to estimates by experts on questions from Russian Germans, this number should be in the single-digit, at most lower two-digit thousand range. Under these circumstances, there can be no question of a representation of the population group of several million Russian Germans.

Last Thursday, Family Minister Nancy Faser (SPD) announced that she intended to replace Fabritius and appoint someone from her own party to be the new commissioner. According to reports, Natalie Pawlik, who was born in Siberia, is being traded as the designated successor.

At the Federal Press Conference (BPK) on Monday, the spokeswoman for the Federal Government made the following comments on the question of Russophobia and anti-Russian hostility:

Interior Ministry spokesman Kall said in the BPK that the “narrative” of growing anti-Russian hostility in Germany was “propaganda, lies and disinformation.” This is from the government’s point of view

“Wrong, not at all proven by a high number of crimes against people of Russian origin in Germany. There are these crimes, but no indication that there is rampant or rapidly increasing anti-Russian hostility in Germany.”

However, Kall did not want to comment on the reporter’s question to the federal government about the ban on flags of the Russian Federation or the People’s Republics of Donetsk and Lugansk.

What signs of Russophobia the federal government is still waiting for when the killing of all Russians is demanded, as at a rally in front of the Bundestag on Friday or the graffiti on the Soviet memorial in Berlin-Treptow, remains a rhetorical question.

The late resettlers still have no adequate representation in politics, even though they are all German citizens. They easily make up five percent of the voters, and yet for a long time there was only one member of the Bundestag from their ranks. And even today, the fingers of one hand are enough to count the resettlers in the Bundestag.

More on the subject – At some point, the collar bursts: How far does the patience of the Russian-Germans go?