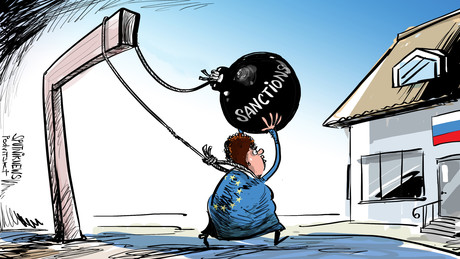 According to media reports, the EU Commission has warned its member states against circumventing sanctions against Russia after Putin asked several states to pay for Russian gas in rubles. Following this is a violation of the sanctions regime.

The European Commission has provided its member states with a confidential analysis of Putin’s decree, in which the Russian president would allow so-called “unfriendly states” supporting sanctions against Russia to buy natural gas from Russia only in Russian national currency. This writes the US financial news agency Bloomberg with reference to “a person familiar with the matter”.

Compliance with Putin’s decree in the form in which Russia’s Gazprombank makes it possible or easier for Western customers would violate the existing sanctions imposed on Russia in connection with the Ukraine conflict. In addition, the legal situation would change for these customers, it said.

At the end of March, Vladimir Putin ordered Gazprombank and the government and central bank of the Russian Federation to switch to rubles for payments for natural gas supplies from Russia to unfriendly countries. The head of state then signed a corresponding decree and said that if the partners did not pay in rubles after April 1, Moscow would consider it as non-fulfilment of the obligations under the supply contracts.

The new payment methods are easy for customers to implement. Gazprombank will open special foreign currency and ruble accounts for receiving payments from foreign buyers of natural gas. Buyers can transfer their payments to these accounts in the currency specified in the supply contract, the bank then trades the foreign currency on the Moscow Stock Exchange and then settles the bill in rubles with the gas supplier.

According to the preliminary analysis by the Commission, which was first circulated internally earlier this month, Putin’s decree significantly changes the previous procedure. In fact, this creates a completely new legal situation, the anonymous interlocutor commented to Bloomberg: The Russian side now has control over exactly when the transaction is considered completed and the customer has met his payment obligations. In this case, Moscow would also have control over the exchange rate.

Last but not least, the described mechanism would violate the restrictive measures that the EU adopted in response to Moscow’s special military operation in Ukraine. The procedure may not only affect the effectiveness of sanctions imposed on the Russian government, the Central Bank of Russia and their agents, but also other bans on various money market instruments issued by Gazprombank.

Natural gas buyers are thus faced with a dilemma, having to choose between violating EU sanctions and unmet demand.