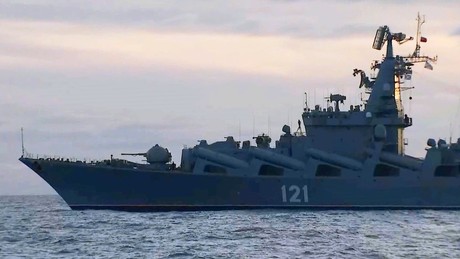 The Russian missile cruiser “Moskva” was evacuated after a suspected “munitions explosion”. The cruiser suffered “serious damage,” the Russian military said, adding that the cause of the fire was under investigation.

The entire crew of the missile cruiser Moskva was evacuated after a munitions explosion caused by a fire, Russia’s Defense Ministry said in a brief statement Wednesday night, which was quoted by several Russian news outlets, including RIA Novosti, TASS and Interfax.

The cruiser suffered “serious damage,” the Russian military said, adding that the cause of the fire was under investigation. However, the Ministry of Defense has not yet confirmed the incident on its official website, nor has it given any further details.

Launched in 1979, the Atlant-class missile cruiser is armed with 16 anti-ship missiles and numerous other anti-air missiles, torpedoes and guns. It belongs to the Black Sea Fleet and has been deployed off the coast of Ukraine since February.

Ukrainian officials claimed on Wednesday evening that a battery of their Neptun anti-ship missiles hidden in Odessa twice successfully hit the “Moskva” and set the cruiser on fire. This claim was made, among others, by Maxim Marchenko, head of the military administration in Odessa, and Anton Gerashchenko, adviser to the Ministry of Interior in Kyiv.

However, they provided no evidence to support their claims. A Ukrainian Telegram channel reportedly posted a photo of an Iranian ship that caught fire and sank in the Gulf of Oman last year instead — and later deleted the image.

The alleged attack on the ‘Moskva’ came just a day after Ukraine issued a postage stamp depicting the incident – provably fictitious – on ‘Snake Island’, in which 13 Ukrainian soldiers allegedly cursed the very ship before heroically attacking died. In reality, 82 soldiers surrendered to the Russian Navy without a fight and there is no evidence that the alleged exchange ever took place.

Ukraine also claimed to have destroyed the “Vasily Bykov” – another ship involved in the capture of Snake Island. Ukrainian media reported on March 7 that the “Bykov” was hit by a volley of artillery rockets and sunk after two speedboats were lured into a trap. However, the ship reappeared unharmed in Sevastopol on March 16.