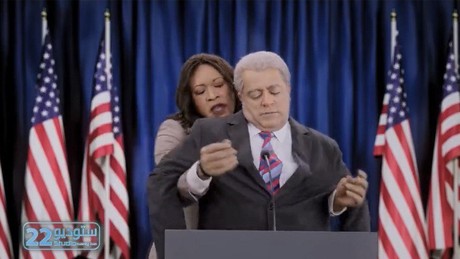 US-Saudi Arabia relations recently hit rock bottom after Saudi Crown Prince bin Salman refused to hold a phone call with US President Biden. Now a sketch by the Saudi broadcaster “MBC” has appeared on social media, in which Biden is portrayed as a vacillating and forgetful statesman.

US President Joe Biden became the butt of ridicule on a comedy show on Saudi Arabia’s Middle East Broadcasting Center (MBC) TV channel this week. The sketch, which has since been published on Twitter, portrays Biden as a faltering and forgetful politician who falls asleep in the middle of a speech. The video went viral after surfacing on social media on Monday.

In it, two people slipping into the roles of Biden and Vice President Kamala Harris step in front of a podium. At the beginning of the skit, Biden says he’s going to “talk about the crisis in Spain,” and Harris whispers something in his ear. Then Biden says he’ll be talking about the crisis in Africa, leading to another correction from Harris before finally saying, “Yes Russia, yes Russia.”

“I want to talk about the President of Russia, Putin, yes, Putin. Putin, listen to me, I have a very important message for you. The message is…” Biden says, before falling asleep on his feet in front of the journalists .

After being roused by Harris, Biden mistakes Putin for the President of China. Then Biden mistakenly refers to Harris as “First Lady” before dozing off again.

A snippet of the skit was posted to Twitter by journalist Asaad Sam Hanna. “For the first time I see Saudi TV mocking the US government,” Hanna tweeted.

Relations between the United States and Saudi Arabia have been strained since Biden took office. Relations with the US hit rock bottom after Crown Prince Mohammad bin Salman recently refused to speak to US President Biden on the phone. The Saudis have already signaled that their relations with Washington have deteriorated under the Biden administration, while expecting more US support for their intervention in the Yemen conflict. The Ansarullah (Houthis) movement in Yemen has recently intensified its retaliatory attacks on oil wells in Saudi Arabia and the United Arab Emirates.

The USA had already demanded in vain from the Arab OPEC countries to increase oil production in view of the Ukraine war. So far, the Emirates and Saudi Arabia have not complied with the request.