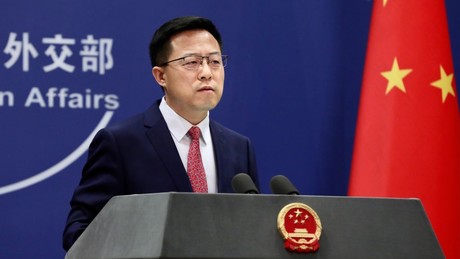 The US President recently accused Russia of seeking genocide in Ukraine. Beijing rejected this thesis and instead referred to Washington’s obligation to strive for de-escalation.

Beijing has called on the international community, including US President Joe Biden, to help de-escalate the Ukraine conflict rather than fueling speculation about an alleged “genocide.” This is reported by the Chinese news agency Xinhua, citing statements by Chinese Foreign Ministry spokesman Zhao Lijian.

Asked by a western journalist what the Chinese government thinks about the US president’s recent statements about an alleged “genocide” by Russian troops, Zhao replied that the conflict must end as soon as possible to avoid a major humanitarian crisis . The Chinese diplomat added:

“All efforts by the international community should be aimed at de-escalation. There is no reason to pour fuel on the fire.”

Zhao also reiterated that the Ukraine conflict must be ended through diplomatic means. The Chinese spokesman called on all parties to exercise restraint:

“The most important thing now is that everyone involved remains calm and reserved.”

At a public event on Tuesday, Biden accused Russian President Vladimir Putin of wanting to carry out a “genocide” in Ukraine. He later reiterated his statement:

“Yes, I called it genocide. It is becoming increasingly clear that Putin is simply trying to erase the idea of ​​even being – being able to be – Ukrainian.”

Zhao said Tuesday that the Ukraine issue has shown what the United States is willing to do to maintain its hegemony. It was the US-NATO axis that pushed tensions over Ukraine to a breaking point. Instead of taking practical steps to defuse tensions, the United States has continued to add fuel to the fire, escalating tensions and urging other states to take sides in the conflict.

In this context, Washington tried to spread disinformation about China and to discredit China’s consistent position in facilitating peace talks. The US tried to shift responsibility for the conflict, to fuel confrontations, to profit from the current situation and to carry out its plans to suppress Russia and China at the same time.

Under the cloak of democracy, freedom and human rights, Washington is instigating “color revolutions” that have led to regional conflicts. Zhao also criticized the unilateral sanctions imposed by the United States that violate international law. The actions of the US run counter to the general trend in today’s world towards peace and development, so that Washington is increasingly facing resistance from the international community.