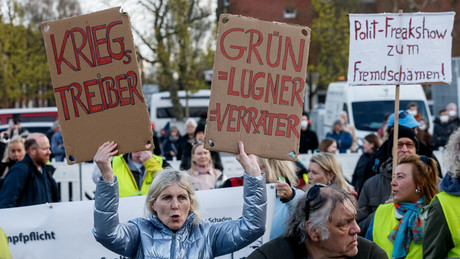 Not much is left of the Peace Party: According to a survey, more than two-thirds of Greens supporters want to arm Ukraine with heavy weapons – for the AfD it is only 20 percent, while more than three-quarters of their supporters reject this.

Most of the supporters of the Greens want to deliver heavy weapons to Ukraine from Germany. That made one opinion poll by Infratest-Dimap, published on Thursday.

According to this, 72 percent of the Greens are in favor of the delivery of tanks and missiles, for example, while only 22 percent are against it. The ratio of supporters of the other two parties in the “traffic light coalition” is similar: in the case of the SPD, 66 percent of supporters are in favor of the delivery of heavy weapons, while 29 percent are against it, and in the case of the FDP, the ratio is 65 to 33 percent. Even with the Union as opposition leader, 63 percent are in favor of a de facto intensification of the conflict, while 33 percent do not want that.

The situation is very different for the supporters of the AfD: only 20 percent are in favor of the delivery of heavy weapons from German soil to Ukraine, the vast majority of 76 percent do not want that. Apparently, supporters of the Left Party were not questioned. Overall, a slim majority of 55 percent of all respondents support the arms deliveries, 45 percent are against.

Green politician Konstantin von Notz is apparently proud of the result, especially with regard to his party’s supporters. The deputy parliamentary group leader in the Bundestag wrote on Twitter (reproduced as in the original):

“I recommend this survey to all those who want to get out of their stereotypical world views of the 80s.”

Shows fine that #GreenKhmer and Sozen are currently the worst warmongers who would risk a world war without hesitation and destroy the country without hesitation. Those who are for peace step out of their stereotypical world view and vote for it #AfD!

More on the subject – Greens: Baerbock and Habeck agree to crisis mode and “radical” politics