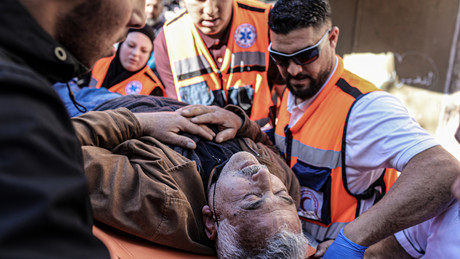 Easter, Ramadan and Passover coincided on Friday. The tense atmosphere erupted in riots on the Temple Mount in Jerusalem. Israeli units entered the Al-Aqsa Mosque. A total of 150 Palestinians were injured and 300 arrested.

There was another escalation of violence in the Middle East on Good Friday. Fierce clashes broke out between Israeli security forces and Palestinians on the Temple Mount in Jerusalem, which is sacred to Jews and Muslims. According to the Palestinian rescue service Red Crescent, around 150 Palestinians were injured after Israeli security forces used tear gas, stun grenades and rubber bullets directly on and in some cases apparently also in the Al-Aqsa Mosque, as the Jerusalem Post reports reported.

According to Israeli police, the incident happened after morning prayers ended on the second Friday of the fasting month of Ramadan. Earlier, according to Israeli sources, a small group of 100 demonstrators gathered stones and pieces of wood to pelt Jewish worshipers and Israeli security forces. 300 Palestinians were arrested. At that time, around 12,000 Muslim believers are said to have been on and around the Temple Mount.

The Palestinian news agency Ma’an disagreed famousThat violence erupted at dawn on Friday when Israeli occupying forces ambushed the Al-Aqsa Mosque through the Moroccan gate, also known as the Mughrabi Gate, and indiscriminately fired sonic bombs and rubber bullets at worshipers. A spokesman for the agency added that the Israel Defense Forces obstructed the work of the ambulances that reached the mosque’s entrance gates, summing up:

“Violent clashes broke out between the occupying forces and hundreds of young men stationed in the courtyards of al-Aqsa.”

According to these accounts, the Israeli special forces also attacked medics and press teams, pursuing them into the courtyards of Al-Aqsa Mosque and beating several of them. Commenting on what happened, Israeli Foreign Minister Yair Lapid said:

“The violence perpetrated on the Temple Mount this morning is unforgivable and contrary to all religious beliefs in Israel. […] We are committed to freedom of religion.”

The Jordanian Foreign Ministry reportedly strongly condemned the actions of the Israeli security forces on the mountain, calling it a “grave breach” of Israel’s responsibility to the site.

The office of the head of the Palestinian Authority, Mahmoud Abbas, said Israel was turning a political disagreement into a religious war, blaming the Israeli action and the police on the mountain.

Sheikh Omar al-Kiswani of Al-Aqsa Mosque called on the Palestinian people to come to the Temple Mount and defend it on Friday, Palestinian media reported.

Hamas, PFLP and Islamic Jihad condemned the attack on Palestinian believers and called on Palestinians everywhere to support their “defense” of al-Aqsa.

The United Nations Special Coordinator for the Middle East Peace Process, Tor Wennesland, wrote on Twitter that he was “deeply concerned by the deteriorating security situation” on the Temple Mount. He tweeted:

“The provocations on the Sacred Esplanade must stop now. Allowing tensions to continue to rise only risks further escalation.”

Deeply concerned by the deteriorating security situation in #Jerusalem. Provocations on the Holy Esplanade must stop now. #U.N is in close contact w/ key regional partners & the parties to calm the situation. Allowing tensions to spiral further only risks another escalation. pic.twitter.com/4bu9SUeh20

Easter, Ramadan and Passover fell on one day on Friday, making the situation in the city particularly tense. In addition, due to the Corona situation, foreign guests are allowed to be part of the Christian Good Friday procession for the first time since 2020 and the city is at its seams bursts.