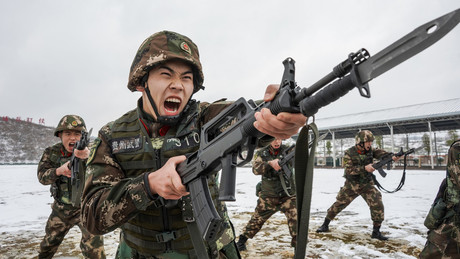 Beijing again warned the United States not to maintain official contacts with Taiwanese authorities. At the same time, the People’s Republic of China initiated military maneuvers in the region – obviously intended as a warning to Washington.

Beijing has urged the United States to sever all official ties with Taiwan. Chinese Foreign Ministry spokesman Zhao Lijian said on Friday, according to the Chinese news agency Xinhua. Beijing regards the island as an inalienable part of the Chinese state. The Chinese diplomat told journalists:

“The US should stop official exchanges with Taiwan.”

He also pointed out that the US actions run counter to the one-China principle and the principles of the three joint communiqués of the two countries, which regulate the fundamental relations between the US and the People’s Republic of China, particularly with regard to the Taiwan issue .

China will hold military exercises near Taiwan in response to US provocations, according to the Chinese Defense Ministry. The Chinese military stated:

“On April 15, the Chinese People’s Liberation Army Eastern Theater Command dispatched warships, bombers, fighter jets and other forces to organize multi-role combat patrols and conduct naval and air exercises in the East China Sea and around the island of Taiwan.”

Taiwanese news agency CNA reported that a delegation of six US congressmen led by Bob Menendez, chairman of the US Senate Foreign Relations Committee, arrived on Thursday for an unannounced visit to the island to hold talks with the Taiwanese president Tsai Ing-wen and Defense Minister Chiu Kuo-cheng.

Beijing then declared that China strictly rejected any official contact between the United States and Taiwan.

Zhao warned that the US should abide by the one-China principle and the provisions of the three joint Sino-US communiqués, and “stop any form of official exchanges with Taiwan and stop following this dangerous path.”

The Pentagon earlier said it had received State Department approval for a $95 million arms deal with Taiwan. The contract includes, among other things, the training, deployment, deployment, operation, maintenance and support of the Patriot missile system and related equipment.

As part of the One China Policy, China regards Taiwan as a Chinese province. This is also the prevailing view of international law. The USA also officially committed to this principle in the 1970s – as did the Taiwanese leadership itself in the early 1990s. However, there are differences regarding the precise interpretation of this one-China principle.

Taiwan was part of the Chinese Empire for centuries. After defeat in the Chinese Civil War, the nationalists under Chiang Kai-shek withdrew to this archipelago in 1949, where they claimed to continue the old “Republic of China” against the communists on the mainland. However, the current Taiwanese ruling party, the DPP, believes that Taiwan has now become a completely new state.