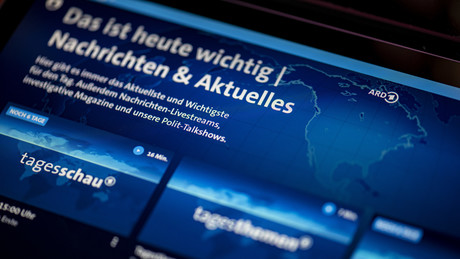 The Tagesschau is considered the flagship of German news broadcasts. As a format in public service broadcasting, it also has a special mandate. The Tagesschau does not fulfill this task of providing neutral and comprehensive information. She runs propaganda.

German reporting on the Ukraine crisis in no way meets journalistic standards. German journalism is neither independent nor does it try to develop a comprehensive view. Efforts to maintain neutrality are also currently being sought in vain in the major German media. German journalism is, so to speak, “embedded” in the war and the media part of the warlike actions of the West. The breadth of German journalism has returned to propaganda.

The following is about the Ukraine coverage of the Tagesschau. As a news format of public service broadcasting, the quality of reporting is different from that of private news formats. The latter are basically allowed to spread what they want. There is no requirement of neutrality for them. In the end, it’s the market that regulates it, and the declining circulation figures clearly show that the German mainstream is writing against the opinions and interests of its readers. The fact that the focus of the content has not changed despite the economic threat indicates how closely the German press is intertwined with transatlantic interests.

In contrast to the private media, public service broadcasting has a specific mandate. This legally enshrined mandate derives historically from the instrumentalization of the media by the state and particularly in the “Third Reich” of the Nazi dictatorship. German radio was state propaganda and thus a strategically important part of the warfare in World War II.

Something like this shouldn’t happen again. An institutional framework was created to prevent ideological monopoly and guarantee plural journalism. Unfortunately, the reporting on Ukraine now clearly shows that this project has failed miserably.

A low point that was certainly only temporary was the reporting on the small town of Bucha not far from Kyiv. The city was occupied by Russian troops. As part of peace negotiations, a withdrawal of Russian troops from the Kyiv area was agreed. Days after the Russian soldiers withdrew, the Ukrainian side accused Russia of allegedly the most atrocious war crimes and tried to back this up with pictures of corpses that Ukraine blamed Russian soldiers for the deaths.

The story presented by the Ukraine in the media space is accepted by the Tagesschau largely unchecked and without critical questions and hammered down by activating racist clichés about Russians. Russian soldiers committed barbaric crimes against the civilian population, is the narrative that has been circulating ever since. In order to maintain these claims, any reference to inconsistencies in Bucha’s story must be suppressed or at least qualified. The Tagesschau also omits the reference to the lack of an actual and, above all, independent investigation, which is required simply by the journalistic duty of care. But this is Butscha’s real scandal: there is no will at all for enlightenment, but there is an unconditional will to instrumentalize the images in the information war against Russia.

It would be important to note that for all of us, Butscha is initially a media event. We currently know practically nothing about the actual causes and processes in this country. You remain in the dark. This is no coincidence and no accident. Critical questions related to journalism are not asked, and obvious inconsistencies are not addressed either. Why, for example, is it argued cumbersomely using alleged satellite images, but aren’t the dead examined independently on site? And how can the Ukrainian prosecutor’s office be supposedly independent in this matter? Why are the Russian arguments on chronology not noted and disseminated? These are very simple questions that the editors of the Tagesschau don’t ask, and probably aren’t even allowed to ask in the context of their strictly transatlantic editorial leadership.

This lack of diligence and journalistic commitment is no slouch. The Tagesschau and the other news formats of the public service broadcasters are involved in the acts of war. The target group of their reporting are the media consumers on the home front. It should be kept in line with an affirmative attitude to the war, to escalation and also to the falling standard of living – of course as a result of the war. Aggression only seems legitimate when the opponent appears inhuman, cruel and irrational. This GEZ-financed propaganda has long been aimed at children with its own formats. In this contribution of Bayerischer Rundfunk (BR), pretty much everything that is presented as supposed facts is false and manipulative. The target group are children, and the message is conveyed to them: We tried everything to keep the peace, but Putin wanted war and Ukraine is his innocent victim. This is the message with which even the youngest are brought in line. A frighteningly impressive example of the current GEZ-financed propaganda.

The Tagesschau also omits everything that could cloud the image of Ukraine as an innocent victim. The war crimes allegedly committed by the Ukrainian side are not named or directly relativized. There are, however, quite a lot of these crimes. Lynch law, the use of human shields by the Ukrainian battalions, the mining of the Black Sea, secret torture prisons and then also the research facilities that presumably served the purpose of developing biological weapons – all of this is covered in a cloak of silence by the Tagesschau. The attack on a train station in the eastern Ukrainian city of Kramatorsk is discussed. When the suspicion grew that it was NOT Russia but Ukraine itself that was responsible for the shelling, the topic simply disappeared into oblivion.

The mass indiscriminate distribution of weapons to the civilian population is also one of Ukraine’s criminal acts. This is also a war crime because it turns civilians into direct participants in the war. Many of them will die. According to the Tagesschau, this step by Ukraine is not worth a word of criticism – on the contrary. The Tagesschau also takes a rather benevolent view of the recruitment of foreign mercenaries. Not mentioned is the fact that foreign combatants who cannot claim treatment under martial law are not covered by the Geneva Convention. It would be the task of the Tagesschau to point out that Germans who go to Ukraine to fight lose all their rights. Such a step is strongly discouraged. The Tagesschau omits this warning.

The Tagesschau also does not show pictures that break through the simplistic claim that Russian soldiers basically regard everyone in Ukraine as enemies. There are numerous testimonies of humanitarian actions. From those cities in eastern Ukraine, where the Russians are frenetically welcomed as liberators, there is no mention in the public service news. That would be important, because it serves to differentiate. It would also show how deeply divided today’s Ukraine is. People in eastern Ukraine, who in fact (for years) were and are most affected by the acts of war, are not automatically opposed to this war. That may sound paradoxical. But it would be the task of good journalism to also make this an issue and to show the complex situation in a way that the German viewer can understand. Presumably the discussion about the delivery of heavy weapons by Germany would then also be settled within a very short time.

A critical and investigative attitude towards German and EU politics would also be necessary. What are the goals? How can the war end? Should the goal be regime change, as numerous politicians are now demanding? These questions almost inevitably lead to the question of how naïve and simple today’s German foreign policy actually is. German journalism in its breadth omits all of this – and likewise the Tagesschau. She also fails to indicate that Western sanctions will not end this war. The war can only be ended through negotiations in which binding security guarantees are also promised to Russia.

All of this could be developed further. But it should have become clear how the Tagesschau and other formats of public service broadcasting (ÖRR) fail in their mission, namely to provide comprehensive and neutral information. There needs to be a fundamental reform of this “PPR” towards a kind of citizen television in which civil society has real and direct influence on program content and design. The Tagesschau is currently not a news program. It is part of a German propaganda; and it stands in a bad tradition. The post-war plan to prevent the political monopoly of the German media once and for all by means of an institutional framework has failed. You get a demonstration of this failure every evening at 8 p.m.