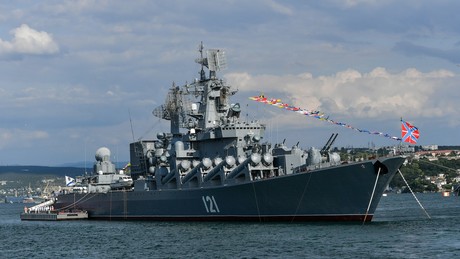 Russia’s defense ministry acknowledged the loss of the Moskva missile cruiser on Thursday evening. Accordingly, the flagship of the Black Sea Fleet sank when it was towed in stormy weather.

The Moskva (Moscow) was reportedly about 90 kilometers south of the Ukrainian city of Odessa when a fire broke out on board. According to the Russian military, this caused ammunition stores to explode and damage the hull. The crew had been evacuated to other nearby ships.

The Russian Ministry of Defense later said the ship would remain afloat. Measures are being taken to have it towed to the port. On Thursday evening, the TASS agency, citing the ministry, reported that the Moskva sank during a storm while being towed.

A senior US defense official said Thursday in Washington it was not yet clear what caused the damage to the missile cruiser. “At the moment we cannot say definitively what caused this explosion and subsequent fire.” It could be due to a missile attack, but there could also be other reasons. The danger of fires and explosions on such ships is generally great because they have flammable and explosive material on board, he stressed.

Kyiv had claimed its forces hit the ship with anti-ship missiles.

The Moskva was the flagship of the Black Sea Fleet. In 1983 it was put into operation under the name Slava (Glory). In 1996, the cruiser received its current name.