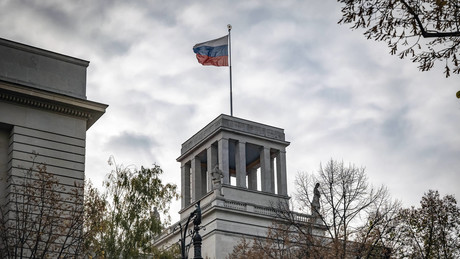 Do you know the game “Silent Post”? The more participants it has, the funnier it gets. At the beginning, someone chooses a difficult word and whispers it to their neighbor. Then it moves on in the circle, from ear to mouth to ear, until it is returned to the sender. He then calls out loud the original word and what has become of it. The results are very funny, especially on children’s birthday parties.

However, when something like this is played out politically, and along a geopolitical cleavage at that, the results aren’t so cheerful, in fact they’re pretty scary at times. But let’s follow the story the other way around. There expresses Green Konstantin von Notz told the Handelsblatt:

“Since the beginning of the war of aggression against Ukraine, which is clearly in violation of international law, the diplomatic missions abroad have obviously been instructed to increasingly spread the Russian government’s fake news themselves.”

And claims that the statements are often “exposed to be clumsy forgeries within a very short time”. An FDP representative also adds his two cents:

“By representatives of the Russian state spreading their lies in Germany, discord is deliberately being sown in society. This is aggression against the Federal Republic. The federal government can respond with further expulsions of Russian diplomats and should take this step to further spread targeted disinformation Reserved.”

The CSU MP Lindholz even demands:

“Now all means of the well-fortified constitutional state must be exhausted to slow down these attempts.”

And then the FDP member Kuhle is brought up with the nice formulation that in Germany nobody should be discriminated against because of their origin or their language, which also applies to Russians, but …

Something terrible must have happened there, the reader thinks when such artillery pieces are rhetorically deployed. And the Handelsblatt also conveys this impression. Very, very bad Russian propaganda conspiracy, a threat to the national community. The sinister Russkis are probably already working on how to take over Berlin again. Even if the protection of the constitution warns. You have to take that seriously.

Somehow I’m not sure whether the colleagues from the Handelsblatt went deeper in their research than simply taking the report from the Federal Office for the Protection of the Constitution at face value. As if you didn’t know that when it comes to really bad things, they either don’t notice, or are up to their ears in it themselves and therefore don’t say anything; so that everything said by the Office for the Protection of the Constitution can only ever affect less bad things. Whatever it was in the past few decades, now they’re the good guys.

So what wrote now the floppy hat club? In his safety notice for politics and administration from April 11 under the title “Re: war in Ukraine” he deals – no, not with Ukronazis, they are really bad, and they are probably involved there too, where they are there with the Colleagues from the BND could get in the way, which they don’t like to see and which then leads to the boys from the Office for the Protection of the Constitution getting some injuries … – no, we don’t want to deal with the love affairs between German intelligence services, but just dutifully quote from the note . So there the facts are reported that the Russian embassy has set up an e-mail box for those affected to report cases of “bullying, harassment, threats, attacks or physical violence” and also cases on the website under the hashtag #StopHatingRussians listed. And thematically deals with increasing “Russophobia”. (These quotation marks come from the Federal Office for the Protection of the Constitution).

So, and now the delicacy, the rating.

“The Russian Embassy apparently deliberately exaggerates the actual extent of attacks or discrimination against people of Russian origin in Germany on its homepage (‘SOS’ mailbox) and in the social networks (#StopHatingRussians), and in doing so, it resorts to unverifiable allegations. This action can contribute to further fueling the already emotionally charged social situation, especially within the Russian and Ukrainian communities in Germany.Actions such as the pro-Russian motorcade through Berlin as well as reports and images of suspected war crimes such as the current one from the Kiev suburb of Bucha, where Russian troops are targeting Should have shot civilians, could cause additional tension.”

Exaggerated, apparently deliberately … heat up the mood … create excitement … in front of my inner eye there is immediately a blood-soaked picture headline, at least. Large letters flickering across the screen with Attention! are you discriminated against Sign up here! SOS@russian-botany.de ! Or a ticker, above which, of course, on the main page, there is the latest news, like this (this is just my imagination):

“Sonia S. is desperate. In tears. She has not slept for three nights. Her innocent son was spat on by his classmates because he is Russian. The teacher also saw no reason to intervene. As usual, she is abandoning the child because he is Russian. Sonia didn’t dare to complain to the teacher. We helped. Now she’s spending a refreshing holiday in climatically demanding regions.”

It’s like that. At least a picture, maybe accompanied by music from Katschturian and Siberia at the end, right? After all, they are Russians…

No, the colleagues from the Handelsblatt definitely did not look at the Russian Embassy’s website to check how the statement by the Office for the Protection of the Constitution relates to reality. Well-behaved. That’s how trust goes, boys. Always believe what the press release says. Or in the security notice. One thing has clearly spared you – the somewhat tedious search for the object of outrage. Because there are no flaming red letters on the main page. Not even a hint. I still haven’t found the email address, although at least thanks to the Handelsblatt, the Office for the Protection of the Constitution and several angry German politicians, I assume that it actually exists.

And if you want to get the atmosphere pumped up or are looking for excitement, you have to go to the “News” subpage, and then left, in the menu, up to position 13. There they are, the stories, if you click on #StopHatingRussians . An example:

“In Berlin, Alexander K.’s car with the Russian license plate was damaged.”

Wow. But now I’m completely emotionally overloaded and have to get rid of my indignation somewhere immediately. Such a massive, deliberate attempt to divide society!

That is what is at the starting point of our silent mail. An innocent list that simply anonymously lists the cases that are reported to the embassy. Without evaluation, let alone over-evaluation. An email address that is even more difficult to find than the list, and a list. And instead, reactions that sound as if civil war were about to break out in Germany tomorrow because of the hashtag #StopHatingRussians.

The Russian Embassy, ​​by the way, responded to the allegations reacted, pointing out that it is simply an embassy’s job to look after its compatriots. When she’s right, she’s right. I would have at least put a link on the main page and started asking a person affected every now and then if he or she would be willing to publicize it further and then, say once a week, sent out a press release to that effect. Although, that’s true, you can save yourself, they’re only Russians. If they dress up as Syrians maybe?

The Federal Office for the Protection of the Constitution has already inflated the number enormously. But the politicians who then explain to the Handelsblatt that embassy employees could be sent home because of this – is that crazy or is that crazy? Have any of them even taken a look at what we’re talking about?

At least Matthias Bröckers recently quoted a nice joke. It is a little comforting when you get such an extreme illustration of the subject:

Two Soviet soldiers meet in May ’45 in front of the Reichstag. One says to the other: Comrade, why are you looking so sad? The other replies: It’s so bad that we lost the information war against Goebbels…

More on the subject – The war, the culture and a steadfast dancer