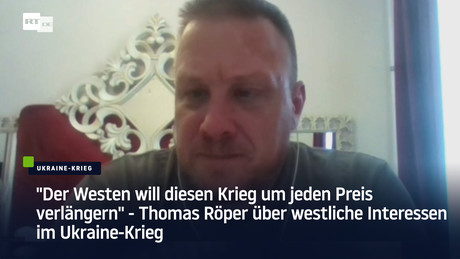 The policy of the West in the war in Ukraine is characterized by unilateral, war-prolonging measures, as the Russia expert Thomas Röper explains in an interview with RT DE.

Germany and the Western governments are acting as Washington’s and NATO’s extended arms, and Thomas Röper emphasizes that there is no sign of an independent, sovereign foreign policy. He has been in the contested areas of eastern Ukraine for several weeks and reports on the conditions on site. In the interview, Röper explains that he only found out about the alleged Russian chemical weapons attack on Mariupol through the media, even though he was in the heart of the city at the time of the attack.

There is a large amount of disinformation about the Russian military operation in circulation, which is accepted unchecked by the western media and presented as “true facts”. In an interview, Röper describes his impressions of the situation on the ground and explains to what extent arms deliveries will not end the war but will unnecessarily prolong it.