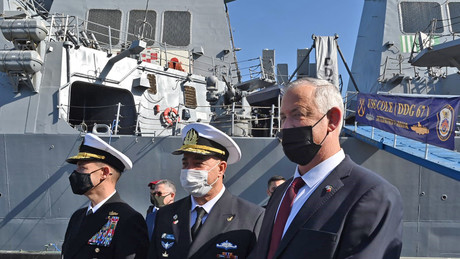 US Navy in the Middle East creates a new Task Force 153 to specifically address maritime threats in the Red Sea and Gulf of Aden.

US 5th Fleet and the multinational Combined Maritime Forces are standing up a new task force for Red Sea region security, following the success of recent task forces in recent years. https://t.co/DrVIt9p6p0

The US-led Task Force 153 Combined Maritime Forces (CMF) will operate in the Red Sea, Bab al-Mandab and the Gulf of Aden, and will also target human trafficking and smuggling of drugs and other illegal goods, US 5th Fleet commander Vice Admiral Brad Cooper told journalists from from its headquarters in Bahrain.

The task force would consist of two to eight ships and is part of the 34-nation Combined Maritime Forces, which Cooper also commands.

Asked about missiles and drones being used by the Houthi to attack US partners Saudi Arabia and the United Arab Emirates, Cooper said the new task force will limit the Houthi’s ability to obtain such weapons . The task force’s deployment comes during the current two-month truce in Yemen’s nearly seven-year war that has killed tens of thousands and displaced millions more.

Combined Task Force 153 will be the CMF’s fourth joint task force, established in 2002 as an international naval coalition to combat human trafficking, terrorism and piracy in the region. Cooper declined to say on Wednesday whether the new patrol would specifically target arms smuggling for the Houthis. US-led efforts to intercept such arms shipments in the Red Sea have struggled in recent years.

Saudi Arabia has already signaled that the country’s relationship with the US has deteriorated under the Biden administration, with the Saudis expecting greater US support for their intervention in the Yemen conflict. The Ansar Allah (Houthis) movement in Yemen has recently intensified its retaliatory attacks on oil wells in Saudi Arabia and the United Arab Emirates.

More on the subject – U-turn in Yemen: What is Bin Salman’s strategy after President Hadi’s “resignation”?