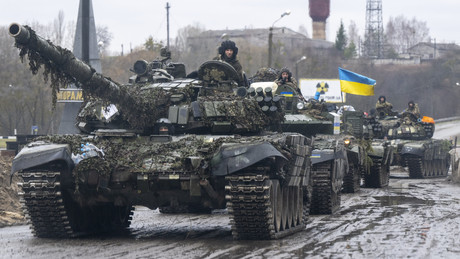 According to information from a US newspaper, the United States wants to increase its support for the Ukrainian army in its fight against Russian forces. Washington had already announced arms deliveries worth 800 million US dollars.

The United States wants to increase the intelligence it provides to Ukrainian forces to help them counter Russian forces in Donbass and Crimea. The Wall Street Journal reported on Wednesday. This is part of a policy shift in Washington’s support for Ukraine, which includes a new heavy weapons package.

According to the White House, a decision was made last week to increase intelligence cooperation to help the Ukrainian military better detect Russian troop movements and hit them with artillery, drone strikes and other weapons, including those provided by the US.

However, under the new strategy, the US would not provide intelligence that would allow Ukrainians to attack targets on Russian territory. That’s a caveat set by Washington to reduce the possibility of the conflict escalating further, the report said. The newspaper quotes an anonymous US intelligence official:

“As the conflict evolves, we continue to adjust to ensure agents have the flexibility to share detailed and timely information with Ukrainians.”

The White House’s decision to provide more intelligence and artillery to Ukraine appears to signal a shift in the US approach to the conflict. Previously, for several weeks, Kyiv had repeatedly requested tanks, planes and other heavy weapons from the US and NATO partners.

So far, the US has refused to share target data that would allow the Kiev military to take offensive action to retake disputed territories in Donbass and Crimea.

According to reports, it was Republican lawmakers who were urging additional intelligence to be made available to Kyiv in the face of an expected resumption of fighting, prompting the government to revise previous intelligence-sharing arrangements.

In a hearing before the Senate Armed Services Committee on Thursday, US Secretary of Defense Lloyd Austin hinted at the upcoming change in information sharing with Ukraine and told members that the Biden administration plans to provide updated guidance. Austin explained that the previous guidance did not make it clear that such information could be used to help Ukrainians launch an attack on Donbass and Crimea.

As a result, US intelligence and Pentagon officials began work on amending the guide. Biden’s latest arms package provides for the delivery of US-made artillery to Ukraine for the first time. The US has reportedly yet to train the Ukrainians to use the 18 155mm howitzers and 40,000 pieces of artillery shells that will be made available. According to the Pentagon, this training will most likely be conducted by US personnel already stationed in Eastern Europe.

The US is also reportedly supplying unmanned boats to be used primarily for reconnaissance duties, although some officials have speculated that the Ukrainians could also outfit them for engaging targets at sea, US media reports.

According to Biden, the new heavy weapons that will be handed over are “tailored to the broader attack that we expect from Russia in eastern Ukraine”.

According to the information, Russia is allegedly moving soldiers to southern and eastern Ukraine, as the first phase of its special military operation, reducing the combat capability of Ukrainian troops, has been officially recognized as completed. Ukraine used the lull in hostilities to increasingly ask the West for more armaments and sanctions against Russia.

Thousands of Javelin anti-tank weapons, Stinger anti-aircraft systems and other weapons have already been delivered to Ukraine by the US. The US, meanwhile, halted deliveries of fighter jets to Ukraine because the White House said such a move could result in Russia classifying the US as a belligerent in the conflict. Washington also refused to comply with Ukraine’s demand that the US and NATO countries impose a no-fly zone over the country.

More on the subject – At that time it was against Hitler: US Senate approves Lend-Lease arms deliveries to Kyiv