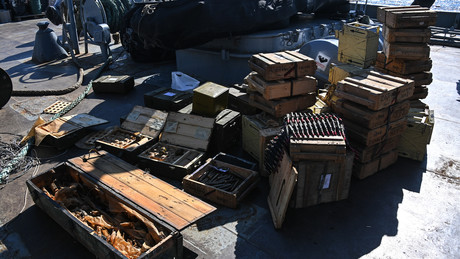 The EU has lifted an exception to an arms embargo on old treaties as part of its fifth sanctions package, according to Reuters. This loophole led to arms worth tens of millions of euros being exported from the EU to Russia.

The European Union has finally ruled out the possibility of arms exports to Russia for its member states. This was reported by the Reuters news agency, citing EU diplomats and officials.

After Crimea joined Russia in 2014, the EU imposed an arms embargo. However, the sanctions included an exception that allowed arms sales under contracts signed before August 2014. According to the news agency, it allowed European countries to export arms worth tens of millions of euros to Russia despite the ban.

On April 8, the EU lifted the ban as part of the fifth package of sanctions against Russia, according to Reuters. According to the news outlet, the lifting was set out in a legal document published in the EU Official Journal, but the European Commission did not mention it in a public announcement of the new restrictions.

According to Reuters, European Commission officials preparing sanctions did not propose the amendment to terminate the old contracts because it was unclear whether all member states would support it. However, the change was made last week after criticism was voiced by several governments, including those of Poland and Lithuania.

According to the European Commission, EU countries sold weapons worth 39 million euros to Russia last year. That’s one and a half times the €25 million they sold guns for in 2020, the same amount as in previous years. France and Germany were among the largest exporters, according to Reuters.

The fifth package of EU sanctions includes a broader embargo on Russian coal imports worth €8 billion and a ban on exports to Russia of a wide range of products, including plants, photographic film, printing inks, paper, some turbines and motors and even particle accelerators. The ban on importing petrochemical equipment, including for LNG projects, has also been extended.

Three days after the sanctions were imposed, on April 11, Lithuanian Foreign Minister Gabrielius Landsbergis announced that the EU had started drafting a sixth package, which would also include options related to Russian oil supplies.

Russia’s Foreign Ministry called the Western sanctions unlawful and promised to act on them. Dmitry Birichevsky, head of the Russian Foreign Ministry’s department for economic cooperation, warned that Russia is sufficiently integrated into the world economy and “double-edged weapons of sanctions” are hitting all countries in the world.

More on the subject – Russian military confirms surrender of arms by 1,000 Ukrainian soldiers in Mariupol