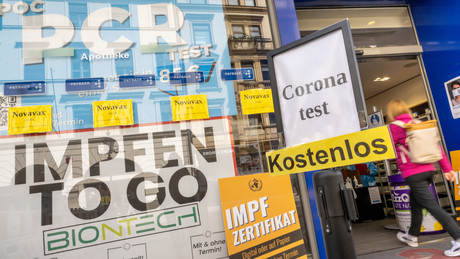 The vaccines against COVID-19 are effective and safe: politicians and the media undeterred justify their advertising and mandatory advances for the “pikse” with the narrative. Reports about people who have been vaccinated or who have been vaccinated in rows with COVID-19 disenchant the narrative, play it down, and always set new premises. “Herd immunity” became “protection of the health system” because the funds prevented severe courses.

The fact that in March almost half of all seriously ill COVID-19 patients were boosted according to the DIVI intensive care register is wiped off the table with the vaccination rate in the total population. Contact guilt allegations with the AfD fears a highly frequented one set up especially for those affected by vaccination Ambulance in Marburg.

Politicians and the media may stoically deny that the narrative that the mostly new vaccines led the world out of the pandemic was on thin ice from the start. The manufacturers of the mRNA vaccine Comirnaty, Pfizer and BioNTech do not do this.

In his annual report to the US Securities and Exchange Commission, transmitted on March 30, 2022, the Mainz-based company discloses interesting details. The key point of the statements is: BioNTech does not even know whether it will ever be able to receive permanent approval for its mRNA vaccine in the EU, the USA and various countries. The reason: Perhaps one will never be able to prove sufficient effectiveness and safety by means of studies.

In the report, BioNTech is very skeptical looking ahead, although that federal cabinet already bagged corona vaccine contracts until 2029 with this and four other companies in March. Also for other pandemics, which are obviously expected in the next few years, the federal government has already harnessed BioNTech. But BioNTech complains that all of this could backfire. Literally translated, it writes in its report:

“We may not be able to demonstrate sufficient efficacy and safety of our COVID-19 vaccine and/or variant-specific product candidates to receive permanent regulatory approval in the US, UK, European Union or other countries where the vaccine has been approved for emergency use or has received conditional market approval.”

BioNTech apparently protects itself by continuing to warn:

BioNTech has only mRNA technology and Pfizer to thank for its rise to fantastically high super profits. To own information the previously unsuccessful company made a net profit of 10.3 billion euros in the last vaccination year alone – with sales of 19 billion. For this year, too, it is – still – expecting sales of between 13 and 17 billion euros. And for that it now plans

“the construction of state-of-the-art mRNA production facilities, initially in Africa and Asia, to ensure sustainable local supply and to increase production capacities (…)”.

However, the mood of the BioNTech protagonists is not untroubled. The worry of never receiving final approval is too great. BioNTech further elaborates on this in its report:

Regardless of the lack of safety and efficacy studies to date, almost 16 months after conditional approval in the EU, the construction of production facilities in the southern hemisphere with particularly inhuman exploitation conditions naturally costs a lot of money. Unfortunately, you can’t pull that off your sleeve, BioNTech complains elsewhere. His remarks read like a request to the federal government for more and more funding from the tax pot:

“We may require significant additional financing to achieve our goals and a failure to obtain such capital on acceptable terms, or at all, could force us to delay, curtail or terminate our production development programs, commercialization efforts or other operations.”

After all, the group does not know what the future will bring in terms of Corona. He anticipates possible sales restrictions due to lack of effectiveness, high costs or difficult storage at very low temperatures. But there could also be problems, it said, if the COVID-19 numbers go down. Sounds logical: diminishing fear of corona prevents business because fewer and fewer people can then be boosted.

And finally, it is unclear to what extent the vaccine “is still necessary beyond the current pandemic if it is an endemic virus”. It is even questionable, it is said,

“the durability of the immune response generated by our COVID-19 vaccine, which has not yet been demonstrated in clinical trials”.

So BioNTech openly admits that the state authorities, in the EU the EMA, in Germany the Standing Vaccination Commission (STIKO) at the Robert Koch Institute, recommended the double vaccinations and subsequent boosters – now already two – without the manufacturer providing any proof of the duration of an effect produced – or would have produced until today.

And apparently BioNTech CEO Uğur Şahin and his management are even afraid of prison. At least that’s what another passage in the report on financial management reads. It says:

However, the fear of consequences extends well beyond possible “accounting errors”. The clinical studies for the emergency and conditional approvals were too small to capture possible serious side effects in their entirety, the company said. It further writes:

“Therefore, side effects and other issues could be observed with widespread use that were not seen or expected, or that were not as common or severe during clinical trials.”

Fear of “substantial liability claims” due to misinterpreted late damages

BioNTech “cannot guarantee that newly discovered or developed safety problems will not occur. And in very notable contradiction to the argument often made by various “experts” to vaccination critics that there can be no long-term consequences because side effects always occur immediately, explains BioNTech in the report afterwards :

“With the use of a vaccine by a broad patient population, serious adverse events may occur from time to time that did not occur in the clinical trials of the product or that initially appeared unrelated to the vaccine itself and were only recognized through subsequent information will.”

According to the group, this could lead to the cessation of production and marketing, but also “significant liability claims”. Literally, the group follows this statement:

“Subsequent discovery of previously unrecognized issues could adversely affect the commercial sale of the product, result in product limitations, or result in the product being withdrawn from the market.”

Concerns: Damage reports and rumors could trigger stocks to fall

The reporting of unwanted security incidents, but also public speculation about such incidents, could lead to a slump in BioNTech shares on the stock exchange, according to another concern of the company.

The attentive, critical reader listens up at this remark and almost inevitably thinks of the so-called fact checkers, who censor up and down in social networks and even declare some peer-reviewed scientific studies to be “medical misinformation”. Apparently, they are paid not least to prevent the “public speculation” that inevitably arises after reports of “undesirable security incidents” in order not to endanger the profits of the biotechnology companies producing vaccines. That’s how capitalism works.