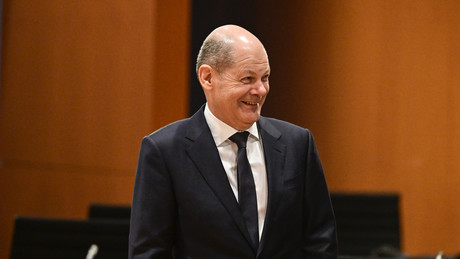 Now even more fuel is being poured into the fire: After the Bundeswehr is to be upgraded with 100 billion euros and numerous arms have already been delivered to Ukraine, Chancellor Olaf Scholz plans to fuel further Ukrainian arms purchases with a total of two billion euros in tax money.

Chancellor Scholz announced on Saturday that a total of two billion euros would be made available for further military spending – above all for Ukrainian arms purchases – as the Tagesschau reported reported.

About half of this is to go directly to Ukraine. According to this, Kyiv can then buy the weapons it wants – after prior consultation with the USA and other allies such as the EU. If weapons from Germany are of interest, this export would have to be approved by Federal Minister of Economics Robert Habeck (Greens) – but this should only be a formal act.

The money is to be made available as part of the Federal Government’s so-called “Upgrading Initiative”. A further 400 million euros from the overall package are therefore available for the “European Peace Facility“, which buys the weapons for Ukraine. The remaining 400 million euros are intended for other friendly countries – more details were not initially given in this regard.

According to government circles, two billion euros of taxpayers’ money is not part of the recently approved “Bundeswehr special fund” amounting to 100 billion euros, but is additional expenditure.

On February 24, at the beginning of the war against Ukraine, Russia’s head of state Vladimir Putin clearly warned not only the Ukrainian combatants but also external actors against military escapades against Russia:

“No one should have any doubt that an immediate attack on Russia will result in crushing defeat and dire consequences for the aggressor.”

More on the subject – US arms industry sees longer-term benefits in the Ukraine war: US senators earn money