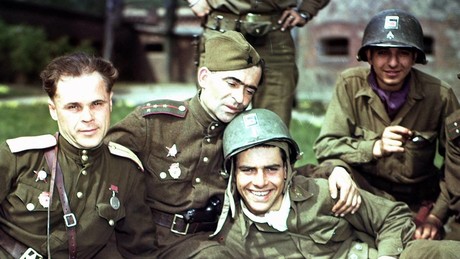 The fraternization between East and West seems to be over for the time being in Torgau, Saxony: This year the city is not holding a commemoration ceremony for the meeting of Soviet soldiers and US GIs on April 25, 1945. The reason is the war in Ukraine.

The Saxon city of Torgau canceled the commemoration of the so-called “Elbe Day” this year, which commemorates the meeting of Soviet and US troops on April 25, 1945. At that time, Soviet and US soldiers shook hands on the rubble of the Torgau Elbe Bridge.

The current situation in Ukraine is not suitable for such a meeting, said Mayor Romina Barth (CDU) opposite to the MDR. However, those who wish can lay wreaths or flowers at the monument of encounter on that day.

In addition, the Bishops’ Convention invites you to a joint prayer for peace on April 25th at the bridge pillar of the former Elbe Bridge. The so-called “Elbe Day”, the music festival on the banks of the Elbe, will take place as planned on April 30th, the mayor said. In addition to musical accompaniment, numerous clubs from the former Saxon residence city will present themselves. At nightfall, a peace light ride is also planned on the Elbe.

More on the subject – Buchenwald and the swapped flags – can it be more cynical?