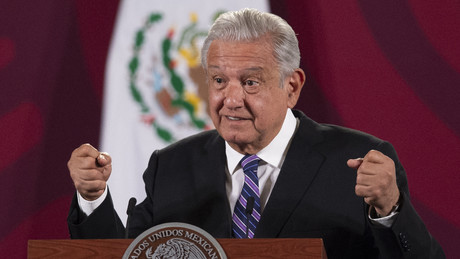 A referendum was held in Mexico a few days ago. President Manuel López Obrador tried to get a vote for his previous government activities and thus to have his most important strategic plans backed. It is about expanding the state’s position in the field of power generation and in the extraction and processing of Mexican crude oil.

Accordingly, Mexico is to receive 54 percent of the shares in the energy sector, while foreign companies are to be pushed back to second place with a maximum of 46 percent. That drew the largest US and Spanish firms in the field, who are threatening fierce resistance and attempting to stoke anti-government political sentiment in the country.

According to observers, the first constitutional referendum to be held in Mexico halfway through the presidential term on whether or not to vote him out of office produced a tie. Both the government and the opposition interpret it as a victory for their own camp.

The two questions were: “Do you want to end the President’s mandate because of a loss of confidence?” and “Do you want him to remain in office until the end of his mandate in 2024?”

Mexico’s president still holds a popularity rating of 60 percent after three years, so the referendum was not really necessary to proceed with his previous plans. Manuel López Obrador, popularly known as “Amlo”, nevertheless wanted to give the population the opportunity to express their views on the planned changes in strategic sectors of the economy.

He received approval from 91.8 percent of voters, but only a low overall turnout. Around 18 percent of the registered voters, that is 16.3 million, went to the polls. For a legally binding result, 40 percent would have been necessary. Ultimately, however, this result does not change the legitimacy of government policy.

Political observers explained that the various electoral processes in Mexico also generate different levels of participation and can only be compared with each other. In a recent referendum on whether past presidents can be prosecuted, only six million voted. In the presidential elections, on the other hand, turnout is between 60 and 70 percent. In the last midterm elections, 52 percent took part. This current vote is completely new for the previous one voter culture. Amlo himself said:

“People behaved very responsibly. We are in a new era. Not only representative democracy, but also participatory democracy has developed.”

On the other hand, there were numerous obstacles on the day of the vote. The electoral authority INE had only provided a third of the ballot boxes otherwise available and justified this with insufficient funding from the government. Amlo, for his part, criticized the authority for long queues, insufficient ballot papers and organizational problems which were the expression of an indirect boycott. The director of the agency, who was in office until recently, is a member of the opposition and has publicly spoken out against the vote on several occasions.

The opposition parties conducted a massive media campaign, calling on the population to refuse to vote. No doubt they received funding and professional endorsements from the major international oil companies.

López Obrador believes that the energy sector, including electricity generation, is a key strategic factor that must be controlled by the state. At the same time, the participation of private capital should be maintained with its dynamic.

Mexico’s strategy is to bolster state oil company Pemex so that fossil fuels can be fully processed by national industries, rather than just placing crude oil on the world market. Instead of importing refined end products like gasoline, they want to become a fuel exporter themselves. PEMEX manufactures petrochemical products, natural gas, LPG, sulfur, gasoline, paraffin and diesel. In addition, Mexico is banking on its raw material lithium as the energy source of the future, whose mining and processing are also to be nationalized according to Amlo’s plans.

The public electric company, CFE, will have a constitutional right to generate 54 percent of Mexico’s energy, with private companies sharing up to 46 percent among themselves. (In Argentina, too, the relationship between state and private companies is the same in the energy sector.) But the president’s plans have already drawn resistance from private investment capital. US corporations in particular, but also Spanish companies, have so far had almost the entire energy budget in Mexico under their control.

The United States claims that the reform would violate the new T-MEC free trade agreement between the US, Canada and Mexico. However, the Supreme Court of Mexico has invalidated this claim in a judgment. The US wants to return to the previous NAFTA treaty that kept Mexico in economic dependency and inferiority for 36 years.

It is quite obvious that the US, when it comes to energy supplies, regards Mexico’s oil reserves as its property, just like Venezuela’s.

López Obrador won the 2018 presidential election in the first round with 53 percent of the votes, so a runoff was no longer necessary. In Congress, he won a majority with his MORENA movement (Movement for National Renewal) and the “Together We Make History” coalition. But in the June 2021 midterm elections for the national Chamber of Deputies, 15 regional governors, 30 local parliaments and thousands of city councillors, the parties he led lost votes.